One in five arrests made in China in 2017 took place in Xinjiang, although the region is home to just two percent of the country's population, data from the local prosecutor's office showed. 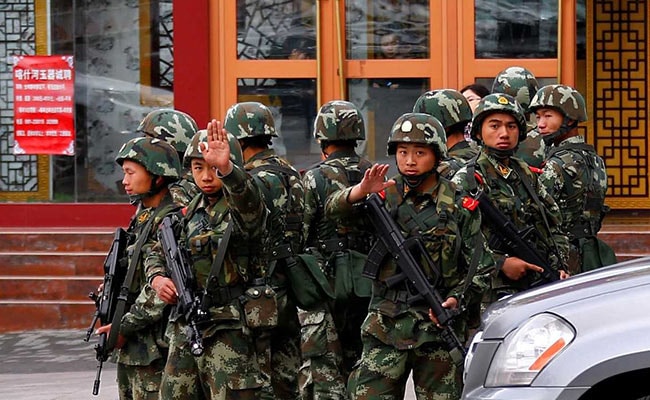 The number of people arrested and imprisoned in China's Xinjiang skyrocketed in 2017, according to official data, as Beijing tightens its grip on the troubled region with surveillance and mass detentions.

One in five arrests made in China in 2017 took place in Xinjiang, although the region is home to just two percent of the country's population, data from the local prosecutor's office showed.

This is a sharp increase from a decade earlier when the area accounted for only two percent of all arrests in the country.

Beijing has come under international criticism over its policies in Xinjiang, where as many as one million Uighurs and other mostly Muslim minorities are being held in internment camps, according to human rights groups.

China defends the mass detentions as necessary to counter religious extremism and terrorism.

But a sharp increase in the number incarcerated for disrupting public security signalled that the justice system was also being used to target Uighurs and other Muslims in the region and put them behind bars for longer periods, said Patrick Poon, China researcher for Amnesty International.

The number of cases linked to "endangering public security" -- a vague charge that covers everything from gathering in large groups without official permission to incidents of mass stabbing -- jumped to 60,510 in 2017 compared to just 1,710 a decade earlier, data from the Xinjiang Yearbook published by the High People's Procuratorate showed.

There were nearly 50,000 cases linked to "damaging social order" in 2017, up from 1,764 in 2007. The charge refers to interfering with the work of law enforcement authorities or government officials.

"In some cases, we learned from overseas family members that... their relatives (in Xinjiang) were secretly tried and sentenced to a few years and in some cases even up to 10 or 20 years imprisonment," Poon said.

"Many were not able to find out and verify the exact details and their relatives' whereabouts."

It is impossible to imagine that a judge in Xinjiang would give a "fair hearing to a defendant", Donald C. Clarke, a professor who has written about the mass detentions, told the New York Times, which first reported the data.

The "sudden increase" in both arrests and imprisonments in 2017, compared to the previous year, is likely the result of hardline tactics adopted by the region's Communist Party chief Chen Quanguo, who was appointed in August 2016, said Frances Eve, a researcher at the rights group Chinese Human Rights Defenders.

"Lawyers believe that many so-called 'terrorist' cases in Xinjiang, which virtually always involve ethnic minorities, do not go through appropriate court procedures," she said.

"For instance, these verdicts have often been prepared before trials take place, with government or Party officials deciding the sentences, not judges."

(Except for the headline, this story has not been edited by NDTV staff and is published from a syndicated feed.)
Comments
Xinjiang ArrestsChina Arrests