Over 8,000 Arrested In Bangladesh Anti-Terrorist Drive 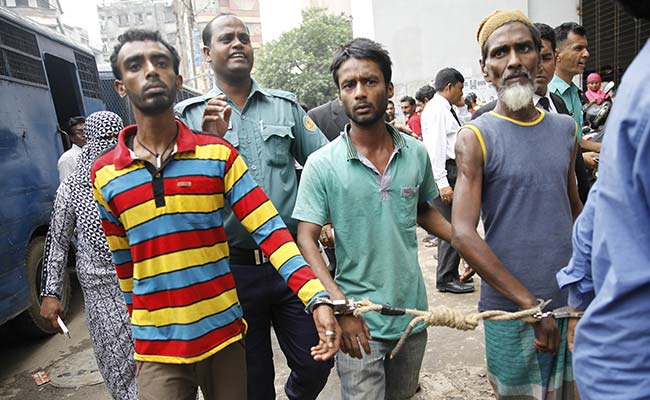 Bangladeshi police escort arrested men in Dhaka who were detained during a anti-terrorist crackdown. (AFP Photo)

Dhaka, Bangladesh: Bangladesh police said on Monday they have arrested more than 8,000 people in a nationwide crackdown on terrorists launched after a series of murders targeting minorities and secular activists.

Prime Minister Sheikh Hasina vowed on Saturday to catch "each and every killer" as Bangladesh reels from a wave of murders of religious minorities and secular and liberal activists that have spiked in recent weeks.

Police spokesman Kamrul Ahsan said 3,245 suspects had been arrested in the last 24 hours, raising the total number to 8,192 since the campaign began on Friday.

Bangladeshi authorities have come under mounting international pressure to end the attacks, which have left nearly 50 people dead over the last three years.

But opposition parties have accused police of using the crackdown to suppress political dissent.

Many of those arrested were suspected ordinary criminals with existing warrants against them.

"Only a fraction of the people who have been arrested are members of terrorist groups.

"Most of those who have been detained have warrants of arrests against them or they are charged with narcotics, arms and other criminal offences."

The week-long crackdown is part of ramped up efforts to halt the killings, with five suspected terrorist group members shot dead in gun battles with police in recent days.

Among those arrested in the latest sweep were members of banned group Jamayetul Mujahideen Bangladesh (JMB), police said.

JMB is one of two local groups blamed for most of the recent killings. The government rejects claims of responsibility from the terrorist group and a South Asian branch of Al-Qaeda, saying international terrorists have no presence in Bangladesh.

Omar Faruq, an alleged senior official of the banned terrorist outfit Hizb ut Tahrir, was among those arrested, a local police chief told AFP from the northwestern district of the Chapai Nawabganj.

"We seized anti-government leaflets, pistol and gunpowder from his possession," Bashir Ahmed said.

"Faruk was previously arrested in 2012 and went out on bail. Then he started trying to re-organise the activities of the banned organisation," he said.