Arctic Blast In US Likely To Break Records, 1,000 Flights Cancelled

Snow is already blanketing the Midwest, Colorado and northern New England and at least a 1,000 flights have been cancelled from Chicago's two big airports on Monday alone. 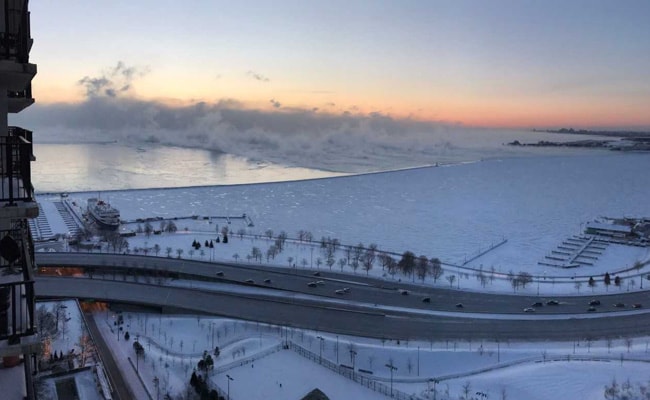 Snow is forecast from the upper midwest to the interior north east starting Tuesday.

The US is readying for a Siberia kind of week ahead with an Arctic Blast likely to set record-low temperatures all the way from areas east of the Rocky Mountains to the North East states.

Snow is already blanketing the Midwest, Colorado and northern New England and at least a 1,000 flights have been cancelled from Chicago's two big airports on Monday alone.

The National Weather Service said that it was the coldest it could be in November in the US.

Chicago recorded a -6 degrees Celsius by 6 p.m. on Monday. The city is already at a full seven degrees lower than the previous record set for November 12.

Snow is forecast from the upper midwest to the interior north east starting Tuesday.

Temperatures in New York are set to plummet to 0 degrees Celsius by late Tuesday. Malta, Montana was America's coldest spot on Monday at -24F.

An American Airlines flight slid off a snowy runway on Monday after landing at Chicago's O'Hare International Airport. None of the 38 passengers and three crew members were injured.

By early afternoon Monday, nearly 450 flights in and out of Chicago airport were already cancelled.

"148 daily record lows are currently forecast to be broken, tied, or come within 1 degree between Tuesday and Thursday this week," according to the National Weather Service (NWS).

"Temperatures that are well below normal will plunge into much of the nation beginning in the Northern Plains, and pushing all the way into Florida by mid-week," it added.

Weather gurus are predicting 6 inches of snow in Illinois and up to 10 inches in northwest Indiana and southwest Michigan.

The NWS predicted that a rush of Arctic air will bring a wintry mix of snow, freezing rain, gusty winds and temperatures in the single digits. Driving conditions are predicted to be dangerous by mid-week with snow beginning to stick to the roads already.

At least two fatal accidents were reported from Kansas and Michigan on Monday as vehicles skidded off icy roads and crashed into oncoming traffic. The Weather Channel said that four people were killed in the accidents.

"Remember to slow down as conditions will become slippery and have your emergency winter car kit items in your vehicle before leaving home," NWS said in an advisory.

Nearly two thirds of America will feel the punch of the Arctic Blast weather system.