The company manufactures three main types of Reynobond panel- one with a polyethylene (PE) core, one with a fire retardant core and another with a non-combustible core, according to its website. 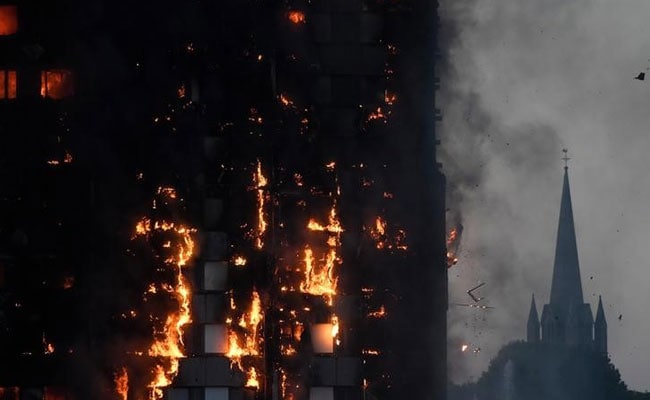 The police investigation was considering the possibility of manslaughter in respect of the fire.

London: Six emails sent by and to an Arconic Inc sales manager raise questions about why the company supplied combustible cladding to a distributor for use at Grenfell Tower, despite publicly warning such panels were a fire risk for tall buildings.

The emails, dating from 2014 and seen by Reuters, were between Deborah French, Arconic's UK sales manager, and executives at the contractors involved in the bidding process for the refurbishment contract at Grenfell Tower in London, where 79 people died in a blaze last week.

When asked about the emails, Arconic said in a statement that it had known the panels would be used at Grenfell Tower but that it was not its role to decide what was or was not compliant with local building regulations.

The company manufactures three main types of Reynobond panel-- one with a polyethylene (PE) core, one with a fire retardant core and another with a non-combustible core, according to its website.

Diagrams in a 2016 Arconic brochure for its Reynobond panels describe how PE core panels are suitable up to 10 metres in height. Panels with a fire resistant core -- the FR model -- can be used up to 30 metres, while above that height, panels with the non-combustible core -- the A2 model -- should be used, the brochure says.

The brochure also issued a blunt warning that cladding can be a fire risk. "When conceiving a building, it is crucial to choose the adapted products in order to avoid the fire to spread to the whole building. Especially when it comes to facades and roofs, the fire can spread extremely rapidly," the brochure said.

"As soon as the building is higher than the fire fighters'ladders, it has to be conceived with an incombustible material."

Nonetheless, between May and July 2014, French, who was based at Arconic's factory in Merxheim, France, responded to requests from the companies involved in refurbishing Grenfell Tower on the availability of samples of five different types of Reynobond aluminium-covered panels, all of which were only available in the combustible PE and FR versions, according to Arconic brochures.

"While we publish general usage guidelines, regulations and codes vary by country and need to be determined by the local building code experts," the company said in an emailed statement in response to the Reuters enquiry.

"The loss of lives, injuries and destruction following the Grenfell Tower fire are devastating, and we would like to express our deepest sympathies to everyone affected by this tragedy ... We will fully support the authorities as they investigate this tragedy," the statement said.

Arconic, which was known as Alcoa Inc until 2016, declined to say if it knew how tall the tower was and the emails seen by Reuters do not specifically refer to its height. They do, however, refer to "Grenfell Tower" and mention other high rise projects where panelling has been used when discussing the appearance that was being sought for Grenfell Tower.

Arconic also knew the quantity of panels being supplied and thus the total exterior coverage. A source at one of the companies involved in the process said Arconic had "full involvement" throughout the contract bidding process.

Omnis Exteriors, Arconic's UK distributor, Harley Facades Ltd., the company which installed the panels, Rydon Group, the overall contractor on the 2014-2016 Grenfell refurbishment, and the local authority which owns the tower block all declined to comment.

Rydon and Omnis have previously said in statements that their work on the refurbishment of Grenfell Tower, which was intended to give the building better heat and sound insulation, complied with all building regulations. Harley said last week it was "not aware of any link between the fire and the exterior cladding to the tower".

In the emails, French and representatives of Harley, Omnis and Rydon also discuss the choice of panel models and colours and how they were inching towards securing the contract with the local authority, the Royal Borough of Kensington and Chelsea (RBKC).

At the weekend, British finance minister Philip Hammond said the type of panels used, which are cheaper than non-combustible panels, were banned for use in high rise buildings in Britain, as they are in Europe and the United States.

Safety experts say the regulations are not black and white as they consider the overall safety of a project, taking account of how the safety measures taken interact.

Promoted
Listen to the latest songs, only on JioSaavn.com
The fatal fire was started by a faulty Hotpoint fridge-freezer in one of the apartments, London police said on Friday. Detective Superintendent Fiona McCormack said insulation on the building, and the cladding panels, had failed safety tests carried out after the disaster.

The police investigation was considering the possibility of manslaughter and criminal offences in respect of the fire.
© Thomson Reuters 2017