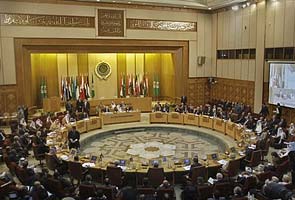 Cairo: In a surprisingly sharp move, the Arab League voted Saturday to suspend Syria over the country's bloody crackdown on an eight-month uprising and stepped up calls on the army to stop killing civilians.

The decision was a humiliating blow to a regime that prides itself as a bastion of Arab nationalism, but it was unlikely to immediately end a wave of violence that the U.N. estimates has killed more than 3,500 people since mid-March.

"Syria is a dear country for all of us and it pains us to make this decision," Qatar's Foreign Minister Hamad bin Jassim told reporters. "We hope there will be a brave move from Syria to stop the violence and begin a real dialogue toward real reform."

In Damascus, pro-regime demonstrators threw eggs and tomatoes at the Qatari embassy to protest the vote.

The 22-member Arab League will monitor the situation and revisit the decision in a meeting Wednesday in the Moroccan capital Rabat, bin Jassim said, a move that appeared to give Syrian President Bashar Assad time to avert the suspension.

But Syria has been unwilling to heed previous calls to end the violence. Saturday's vote came after Damascus failed to carry out a Nov. 2 peace deal brokered by the Arab League that called on Syria to halt the attacks and pull tanks out of cities.

More than 250 Syrian civilians have been killed so far this month, including 12 on Saturday in attacks in the restive city of Homs, the Damascus suburbs and elsewhere, according to activist groups.

President Barack Obama praised the Arab League, highlighting what he called the group's leadership in seeking to end attacks on peaceful protesters. "These significant steps expose the increasing diplomatic isolation of a regime that has systematically violated human rights and repressed peaceful protests," he said in a statement.

Arab League diplomats, speaking on condition of anonymity because they were not authorized to brief reporters, said that if Syria does not adhere to its demands, the organization will work to unify the disparate Syrian opposition into a coalition similar to that of Libya's National Transitional Council. Next steps would be to recognize the opposition as the sole representative of the Syrian people in a move that would symbolically isolate Assad's regime even further.

In his statement, bin Jassim called on all factions to meet later this week to unify their message as a step toward dialogue with the Syrian government, but many within the opposition refuse to negotiate with the regime.

Still, there is little to stop Assad now from calling upon the scorched-earth tactics that have kept his family in power for more than four decades. A long-time pariah, Syria grew accustomed to shrugging off the world's reproach long before the regime started shooting unarmed protesters eight months ago.

An international military intervention has been all but ruled out, given the quagmire in Libya and the lack of any strong opposition leader in Syria to rally behind. International sanctions, some of which target Assad personally, have failed to persuade him to ease his crackdown.

Syria also retains the iron support of Muslim Shiite-led Iran, which wants to keep Damascus in its fold in a mostly Muslim Sunni region dominated by Arab suspicions of Tehran's aims. Should Assad's regime fall, it could rob Iran of a loyal Arab partner.

The vote was a strong message from Syria's Arab neighbours and showed growing impatience with Damascus.

Neil Sammonds, a Syria researcher for Amnesty International, said the unified Arab showing will put more pressure on the U.N. Security Council to impose sanctions despite objections by Syrian allies Russia and China. Only Syria, Lebanon and Yemen voted against the Arab League suspension of Syria, with Iraq abstaining.

"This will help put the diplomatic pressure on the Security Council to act, to show Russia and China that they are out of step with the region and the rest of world," Sammonds said.

Saer el-Nashif, who was among the Syrian opposition leaders meeting with Arab League diplomats in Cairo several times in recent weeks, praised Saturday's vote and said he hopes it leads to a Security Council decision.

Arab nations also are eager to avoid seeing another leader toppled violently, as happened to Libya's Moammar Gaddafi last month. An Arab League decision had paved the way for the U.N.-mandated no-fly zone and NATO airstrikes that eventually brought down Gaddafi, but bin Jassim stressed international intervention was not on the agenda in Syria.

"None of us is talking about this kind of decision," he said.

Syria, which blames the bloodshed on extremists acting out a foreign agenda to destabilize the regime, slammed Saturday's vote as "illegal" under Arab League charter rules.

Its Arab League envoy Youssef Ahmed said Damascus was calling on the "armed opposition abroad to lay down arms, surrender, stop the violence and accept a national dialogue."

Diplomats who attended the meeting said the Syrian ambassador accused the Qatari foreign minister of carrying out a U.S. agenda, and the Qatari official replied that the league was doing this for the good of the Syrian people.

The bloodshed has spiked dramatically in recent weeks amid signs that more protesters are taking up arms to protect themselves, changing the face of what has been a largely peaceful movement. Many fear the change plays directly into the hands of the regime by giving the military a pretext to crack down with increasing force.

Despite growing international isolation, Assad appears to have a firm grip on power.

Promoted
Listen to the latest songs, only on JioSaavn.com
Assad, and his father who ruled Syria before him, stacked key security and military posts with members of their minority Alawite sect, ensuring loyalty by melding the fate of the army and the regime. As a result, the army leadership will likely protect the regime at all costs, for fear it will be persecuted if the country's Sunni majority gains the upper hand. Most of the army defectors so far appear to be lower-level Sunni conscripts.

The government has largely sealed off the country from foreign journalists and prevented independent reporting, making it difficult to confirm events on the ground. Key sources of information are amateur videos posted online and details gathered by witnesses and activist groups who then contact the media, often at great personal risk.
Comments
Syria violenceArab LeagueArab League votes to suspend Syria