Apple Rolls Out New iPad For Students, But Does Not Cut Price

Sales of iPads made up just 8.3 percent of Apple's $229.2 billion total revenue last year, compared with the nearly 62 percent of sales generated by iPhones. 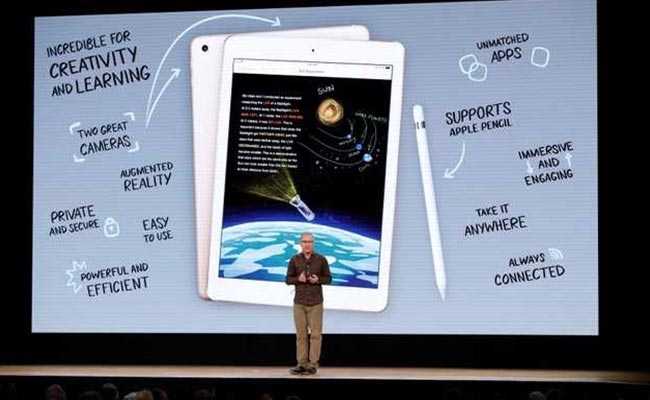 Apple's Vice-President Greg Joswiak speaks at an event in Chicago.

Chicago: Apple Inc on Tuesday rolled out a new iPad that works with its Apple Pencil and is aimed at grabbing more of the U.S. education market, but did not cut the price of the tablet despite fierce competition from cheaper laptops.

The device will have a more powerful computing chip and extensive new software features aimed at teachers and students but keep the existing starting price of $299 for students and $329 for the general public.

Apple is looking to reassert its dominance in U.S. schools, where inexpensive devices and laptops that are geared towards classroom use are seen as a way to hook young consumers.

Laptops running operating systems by Alphabet Inc's Google or Microsoft Corp can be had for less than $200.

Some analysts had believed Apple might cut prices, but the company stuck with its more traditional approach of packing more features into a device and maintaining its minimum price point.

Apple hit hard on the education theme at the Chicago event, with school bells and announcements over a public address system directing press and more than 300 teachers into an auditorium at Lane Tech College Prep High School.

Apple Chief Executive Tim Cook opened the keynote with a nod to politics, saying "we are deeply inspired by the courage of the students who walked out" and marched on Washington, advocating for stricter gun control laws following a school shooting in Florida. The line elicited cheers from students seated at the rear of the auditorium.

The Chicago event comes during a spring buying season when many schools are making purchasing decisions for the upcoming school year.

"We've been at this for 40 years and we care deeply about education," Cook said.

Apple executives said the company will release a iPad model that works with its pencil accessory and features an upgraded A10 Fusion chip, the same CPU that powers the iPhone 7. The company also released a new version of its word processing apps for the iPad designed to work with the pencil and allow students to take handwritten notes more easily.

Apple made up just 17 percent of the K-12 U.S. educational market in the third quarter, according to data from Futuresource Consulting. Meanwhile 60 percent of mobile computing shipments to schools ran Google's Chrome operating system, and 22 percent had Windows.

Apple in recent years made changes to its operating system so that more than one student can log into an iPad, and to its software to let teachers better manage groups of students.

But it faces a tough battle in the educational market given the popularity of Google and Microsoft's cloud-based productivity suites, said Carolina Milanesi of Creative Strategies. Google's G Suite fueled Chromebook sales because it was seen as easy to use to manage assignments.

"Most teachers don't look past G Suite for education," she said. Apple has iWork, which added features in recent years but remains less familiar to teachers than Google's productivity suite or Microsoft's Office.

Sales of iPads made up just 8.3 percent of Apple's $229.2 billion total revenue last year, compared with the nearly 62 percent of sales generated by iPhones.

(Except for the headline, this story has not been edited by NDTV staff and is published from a syndicated feed.)
Comments
AppleIpadChicago