US President Donald Trump said the people who toppled the statue should be "immediately arrested." 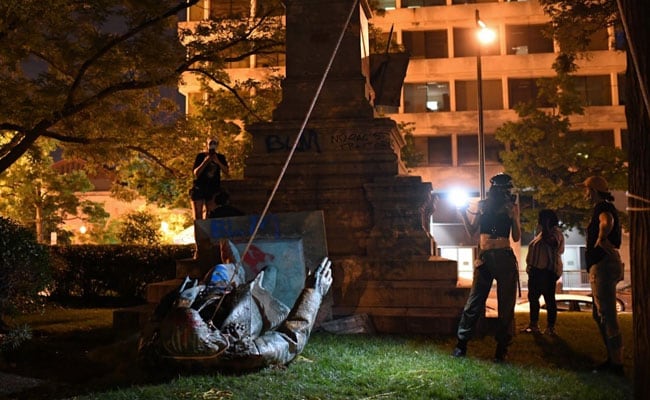 The statue of Confederate general Albert Pike after it was toppled by protesters in Wahsington, DC.

Protesters have toppled Washington DC's only statue of a Confederate general and set it on fire, according to US media, an act labeled a "disgrace" by US President Donald Trump.

The images, broadcast on ABC7 News late Friday, showed the figure of Albert Pike being pulled down by rope before dozens of demonstrators started chanting "black lives matter" and set fire to it.

Trump tweeted shortly afterwards, tagging the city's mayor, that the "D.C. police are not doing their job as they watch a statue be ripped down & burn. These people should be immediately arrested. A disgrace to our Country!"

The capital's Democratic mayor Muriel Bowser and Trump have jousted over the use of force in Washington DC, with the president previously calling in the National Guard to quell unrest.

Marches and rallies were held across the United States on Friday to demand racial justice on the Juneteenth holiday, which commemorates the end of slavery in the country.

Demonstrators had earlier gathered in Washington outside the Lincoln Memorial and near the White House.

Rolling protests have roiled the US in recent weeks, fueled by the deaths of African Americans at the hands of police.

Several monuments depicting Confederate figures have been toppled by demonstrators, who have been protesting systemic racism, police brutality and injustice.