On Monday, hundreds of protesters were pushed back by at least 100 security force personnel after they had thrown ropes around the statue of Andrew Jackson, the divisive seventh US president, in Lafayette Park. 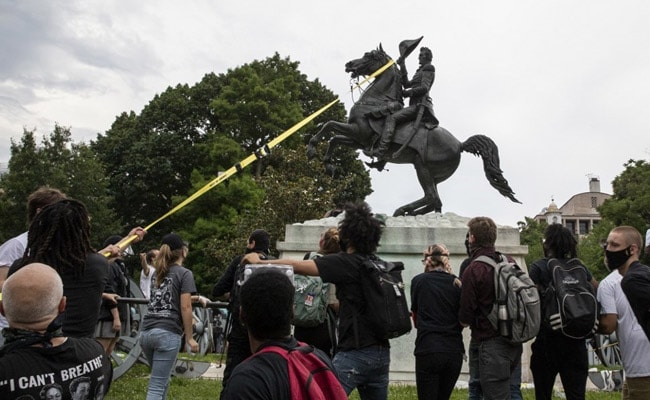 Protesters attempt to pull down the statue of Andrew Jackson in Lafayette Square near the White House.

A crowd of protesters tried to topple the statue of a former US president near the White House Monday evening as police responded with pepper spray to break up new demonstrations that erupted in Washington.

A wave of nationwide rallies calling for racial justice has swept the United States since the May 25 death of George Floyd, a 46-year-old black man killed by a white police officer in Minneapolis, Minnesota.

On Monday, hundreds of protesters were pushed back by at least 100 security force personnel after they had thrown ropes around the statue of Andrew Jackson, the divisive seventh US president, in Lafayette Park.

The word "killer" had been spray-painted on the stone plinth, according to an AFP reporter at the scene.

Jackson, in office from 1829 to 1837, owned more than 500 slaves over the course of his life and was a key figure in the forced relocation of at least 60,000 Native Americans, otherwise known as the Trail of Tears.

"We had ropes, chains, a pulley to pull, and we were going to attach that and tear down the statue," a 20-year-old protester told AFP, on condition of anonymity.

"The police attacked us. They've taken the law to their own hands," Raymond Spaine, a 52-year-old black man cleaning his eyes with saline, told AFP.

A helicopter circled over the gathering of hundreds of people on the newly-renamed Black Lives Matter Plaza, as officers continued to use pepper spray to disperse the protesters.

Earlier this month, police broke up a peaceful rally in Lafayette Park moments before President Donald Trump walked from the White House for a photo-op at a historic church damaged by arson the previous night.

The clash over Jackson's statue is part of the latest movement in the protests: tearing down statues and monuments to individuals linked to the US' racist past.

Protesters initially focused on Confederate generals, such as the Robert E Lee statue in Richmond. On Friday, demonstrators in Washington tore down a statue of Albert Pike, the only statue of a Southern Civil War general in the nation's capital.

But the spotlight has begun to shift to figures of US history previously considered untouchable, including Founding Fathers George Washington and Thomas Jefferson, both slave owners.

Another statue of Jackson was vandalised with red paint earlier Monday in Jacksonville, Florida, which is named after the president.

Trump has delivered blunt instructions to local leaders confronting the protests, telling authorities to "dominate the streets," and he has been unapologetic about the heavy deployment of forces.

He also threatened to invoke the rarely used Insurrection Act, which would mean deploying the armed forces on US soil.