Turban Day was started in 2013 at Baruch College to promote and educate people about the Sikh religion and identity. 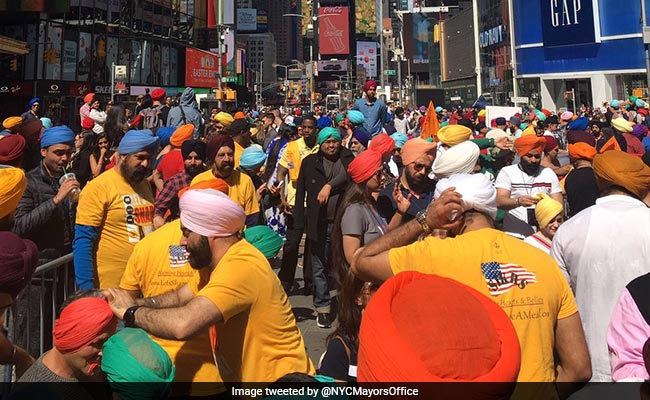 Over 38,000 turbans have been tied in the past seven years: Sikhs of New York co-founder

A sea of colours and tradition of the Sikh culture inundated Times Square, the crossroads of the world, as members of the community tied turbans to thousands of New Yorkers and tourists in an annual fixture aimed at spreading awareness about the Sikh identity.

Sikh organisation ''The Sikhs of New York'' organised the annual Turban Day on Saturday in association with the Consulate General of India in New York. This year's Turban Day also marked the 550th birth anniversary of Guru Nanak Dev and the festival of Baisakhi.

As part of the Sikh celebration of Vaisakhi, the Sikhs of New York are hosting Turban Day in Times Square. Last year they received the world record for tying the most turbans-will they set another this year? pic.twitter.com/Rqz5hxd1JV

As part of the commemoration of Guru Nanak's 550th birth anniversary as well as to mark Baisakhi, this year the Consulate associated with The Sikhs of NY on Turban Day, Mr Sinha said.

"This is a great environment and ambience and the crowd is fantastic," Mr Sinha said, sporting a blue turban as he took part in the commemoration.

"There is no better way than this to raise awareness about Sikhism as well as propagating the message of universal brotherhood and humanity of Guru Nanak Dev ji," he told PTI.

Turban Day was started in 2013 at Baruch College to promote and educate people about the Sikh religion and identity.

Sikhs of New York co-founder Chanpreet Singh said in the seven years that Turban Day has been organised in the city, there has increasingly been awareness about Sikhism, not just through people who are getting turbans tied but by the thousands others on social media following the event.

He said more than 38,000 turbans have been tied in the past seven years since the day started being organised in the city.

It's a beautiful day to show off your beautiful turban! Our officers were proud to celebrate Sikh culture at #TurbanDay today in Times Square. (and we all know you can't leave Times Square without snapping a few photos with friends!) pic.twitter.com/tA6gCyTakP

"Technically, by tying one turban we are educating 200 people who are following it on social media," Mr Singh said, adding that number of volunteers signing up for the event has increased multifold over the years.

"We have people coming from California, Canada, Europe and some from India, especially planning their trip to the US around Turban Day," he said.

This year, the organisation also honoured Sikh personnel serving in the US Army and Navy.

Mr Singh said the organisation will continue in its endeavours such as Turban Day till "the day I walk on the streets and people don't give me two looks," noting that there is need to continue to spread awareness about the Sikh culture the organisation plans to take Turban Day to other cities across the US.

"The celebration was very special and important for us because we not only celebrated Turban Day, like every year, but this year it fell on Baisakhi Day and we are marking it with 550th birth anniversary of Guru Nanak Dev, our first Guru," he said.

Gabriella Vinetti and her friend Eri Banjahi from Argentina clicked selfies, donning their bright green and pink turbans. "We wore the turban in solidarity and in respect of another culture," they said.

Today I got to experience walking around New York wearing a turban, on turban day organised by Sikhs of New York.

They also got me to speak on Hindi TV.@SikhsOfNYpic.twitter.com/xi7L0eUW01

Last year, the Sikhs of New York had created a world record for tying thousands of turbans within a few hours on Turban Day. The organisation had won a certificate from the Guinness World Record for the "most turbans tied in 8 hours was achieved by Sikhs of NY (USA) in Times Square in New York, USA on April 7, 2018."

Every year, Turban Day brings together hundreds of volunteers from the the Sikh community who tie colourful turbans on New Yorkers, tourists and Americans from across the country visiting Times Square. While tying the turbans, they also talk about the Sikh heritage, identity and make those getting the turbans tied aware of the culture.

The event has been aimed at spreading awareness among Americans and other nationalities about the Sikh religion and its articles of faith, especially the turban, which has often been misconceived and misidentified, particularly in the years since the 9/11 terror attacks.