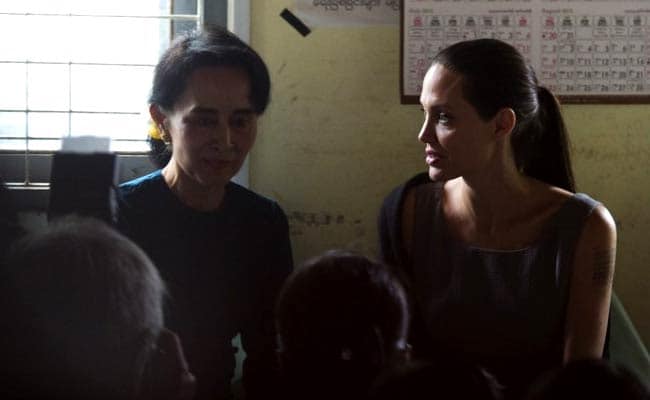 Yangon: Hollywood actress Angelina Jolie met women garment workers in Myanmar on Saturday with opposition leader Aung San Suu Kyi to learn more about their working conditions, as part of her first visit to the country.

The Oscar-winning star, who is also a special envoy for the United Nations' refugee agency, arrived in Myanmar on Wednesday, meeting President Thein Sein in the capital Naypyidaw and survivors of sexual violence in war-torn northern Kachin state.

On Saturday she met Suu Kyi at her residence in Yangon after which the pair visited women from Myanmar's largely female textile industry workforce at their living quarters in Hlaing Tha Yar, a town on the western outskirts of the city.

Dozens of people gathered to catch a glimpse of the Hollywood star and Myanmar democracy icon together as they arrived at the workers' hostel, each welcomed with a bouquet of flowers.

Jolie and Suu Kyi spoke to workers about their living and working conditions as well as their aspirations for further education, according to a statement on Facebook posted by the opposition National League for Democracy party.

The garment industry has been in the spotlight across Asia in recent years because of concerns over labour rights and safety.

Myanmar textile workers too have protested for better pay and conditions after decades of junta rule ended in 2011, with a wave of political and economic reforms opening up new industries in the former pariah state.

The star's visit to the country followed an invitation from Suu Kyi, according to the British Embassy, which is working with Jolie as part of the Preventing Sexual Violence Initiative that promotes prosecutions of sexual violence perpetrators.

On Friday the actress urged Myanmar to ensure those who commit sexual violence are brought to justice after "moving and humbling" meetings with victims in Kachin.

Jolie arrived in Myanmar after a brief visit to Cambodia where she plans to direct a film for Netflix about Cambodia's Khmer Rouge regime seen through the eyes of a war-scarred child.

She was accompanied for that portion of the trip by her 14-year-old son Maddox, who was adopted from Cambodia.

Myanmar is still beset by the legacy of dozens of long-raging civil wars in its border areas and the government is trying to broker a nationwide ceasefire with rebels before general elections in November.

In Kachin some 100,000 people have been displaced since civil war erupted in 2011.
Comments
Angelina JolieAung San Suu KyiThein Seingarment workers in MyanmarNational League for Democracy party