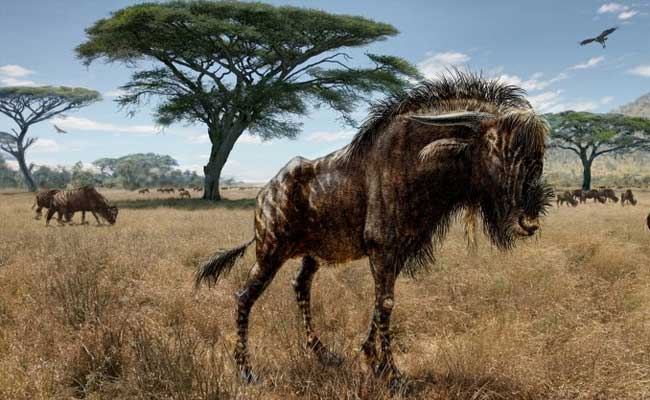 An artist's interpretation of Rusingoryx atopocranion on the Late Pleistocene plains of what is now Rusinga Island, Lake Victoria is seen in an undated illustration courtesy of Todd S Marshall. (Reuters)

Washington: In an ancient streambed on Kenya's Rusinga Island, scientists have unearthed fossils of a wildebeest-like creature named Rusingoryx that boasted a weird nasal structure more befitting of a dinosaur than a mammal.

Researchers said on Thursday the crescent-shaped protrusion atop the head of Rusingoryx, which roamed Africa's savannas tens of thousands of years ago, was unlike anything on any other mammal, past or present. Instead, it resembled the head crests of a group of duckbilled dinosaurs called hadrosaurs.

The hollow structure may have enabled the horned, hoofed grass-eater to produce a low trumpeting sound to communicate over long distances with others in its herd, Ohio University paleontologist Haley O'Brien said.

"This structure was incredibly surprising," O'Brien said. "To see a hollow nasal crest outside of dinosaurs and in a mammal that lived so recently is very bizarre."

The fossils of Rusingoryx, about the size of its close cousin the wildebeest, date from about 55,000 to 75,000 years ago.

Hadrosaurs with similar nasal structures, Lambeosaurus and Corythosaurus, lived about 75 million years ago.

O'Brien said the structure was an example of "convergent evolution" in which disparate organisms independently evolve similar features, like the wings of birds, bats and the extinct flying reptiles called pterosaurs, to adapt to similar environments or ecological niches.

Rusingoryx led a lifestyle similar to hadrosaurs: herbivores both likely traveling in herds. Many scientists think hadrosaurs also used their crests to communicate vocally with one another.

The researchers said Rusingoryx's nasal apparatus may have allowed it to deepen its normal vocal calls into "infrasound" levels other species may not have been able to hear.

"Vocalizations can alert predators, and moving their calls into a new frequency could have made communication safer," O'Brien said.

The researchers examined six adult and juvenile Rusingoryx skulls. The bony crest, laying on the top and front of the skull, was mostly hollow inside. It contained nasal passages that followed the outside of the structure then took an S-shaped pathway down into the soft tissue part of the airway.

The nasal passage then sat atop of a pair of large sinuses.

At least 24 Rusingoryx individuals were found at the site.

University of Minnesota paleoanthropologist Kirsten Jenkins said butchered bones and stone tools there indicated humans may have caused their deaths. Jenkins said hunters may have driven a herd into the stream for an ambush.

The research was published in the journal Current Biology.
© Thomson Reuters 2016