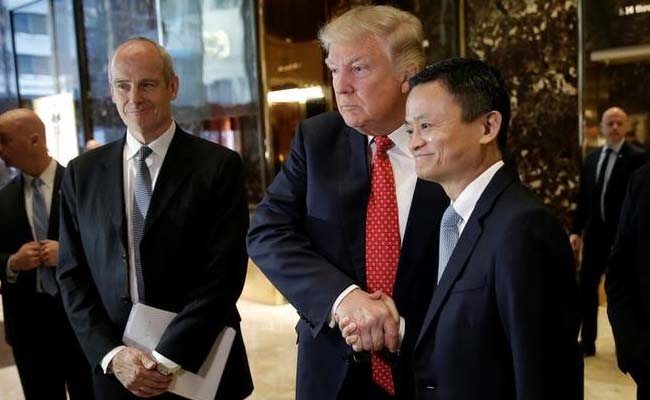 Beijing: E-commerce giant Alibaba's founder Jack Ma has warned of a "big trade war" between China and the US under the new Trump Presidency if conflicts were not dealt properly. He said China's economic outlook will be "tougher than expected" due to continued slowdown of Chinese economy and warned.

"In the coming three to five years... the economic situation will be even more arduous than everyone had expected," the e-commerce billionaire said at an annual meeting of the General Association of Zhejiang Entrepreneurs.

Referring to the slowdown of the Chinese economy to 6.7 per cent last year, the slowest in over two decades, he said it was "only natural" that China's rapid growth over the past three decades could not continue, and that the focus should be shifted to the quality of growth such as upgrading its manufacturing industry.

About the outlook on China-US relations, Mr Ma, who recently met US President Donald Trump, said despite an "overall optimistic" outlook on trade between the world's two largest economies, conflicts "will definitely be there".

"If (the conflicts) were not dealt with properly, they might lead to a relatively big trade war which is not a good thing for China, the US or the world economy," he was quoted as saying by Hong Kong-based South China Morning Post which is owned by him.

Mr Trump has accused China of being a currency manipulator and has proposed steep tariffs on imports from the country.

Mr Ma also said Mr Trump is a smart person and should not be underestimated.

Promoted
Listen to the latest songs, only on JioSaavn.com
"It is only that his speaking style and the way he does things are different from what we are used to expecting from politicians. He saw the many problems existing now in the US and he hopes to solve them in a different way. He is a businessman, a man of action and result-oriented," Mr Ma said, adding that he believed Mr Trump was "a very smart person".

In his meeting with Mr Trump before the US billionaire was sworn in as the 45th President of the US, Mr Ma promised to sell over a million US products in China through his e-commerce outlets and promised to create a million jobs in America.
Comments
AlibabaAlibaba founder Jack MaDonald TrumpChinese economyUS China