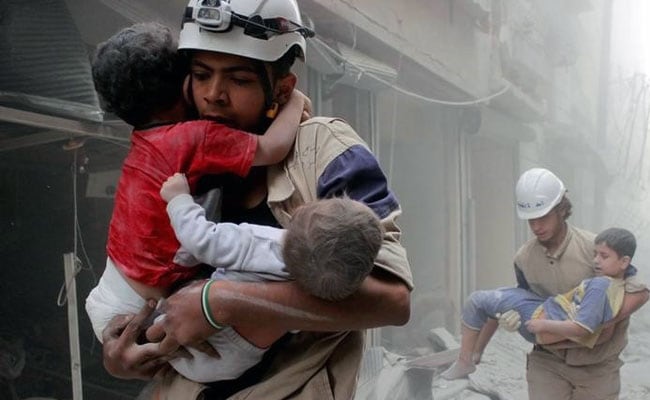 Members of the Civil Defence rescue children after what activists. (Reuters File Photo)

Stockholm: The inhabitants of besieged rebel-held eastern Aleppo have fewer than ten days to receive aid or face starvation and death from a lack of medical supplies, the head of the Syria Civil Defence, or "White Helmets", said on Thursday.

The volunteer group which works in opposition-held territory and has rescued thousands of people from buildings bombed in the civil war is also running out of basic equipment from trucks to diesel and gas masks.

"You cannot imagine how the situation is," Raed Al Saleh told Reuters through a translator. Saleh was in Stockholm to receive the Right Livelihood Award, known as Sweden's "alternative Nobel prize."

"Doctors and the rescue workers in Aleppo are just using what's left of the equipment after bombardments to do whatever they can do," Saleh said.

Rebels in the eastern part of Aleppo city have agreed to a UN plan for aid delivery and medical evacuations, but the United Nations is awaiting a green light from Russia and the Syrian government, humanitarian adviser Jan Egeland said on Thursday.

With freezing winter conditions setting in, about 275,000 people are trapped in eastern Aleppo, where the last UN food rations were distributed on November 13.

Saleh said doctors were so short of supplies they were resorting to making life and death decisions over who receives surgery. "They cannot accept everyone ... There are not enough materials and not enough doctors," he said.

Saleh said the White Helmets had lost 50 percent of their equipment in the last two months.

"We have consumed all the stock of first aid kits in our centres and we have consumed all our stock of gas masks. We are concerned that within ten days we may consume all our remaining stock of diesel which is required for the ambulances and the trucks to move," he said.

The White Helmets director said his workers had responded to approximately ten chlorine attacks in Aleppo in the last ten days - the last being on Wednesday.

Rami Abdulrahman, director of the Syrian Observatory for Human Rights, which monitors the Syrian conflict, said the Observatory had documented two incidents of chlorine attacks in the past fortnight.

On November 11, the executive body of the global chemical weapons watchdog OPCW condemned the alleged use of banned toxic agents by the Syrian government and by ISIS terrorists.

A 13-month international inquiry by the OPCW and United Nations concluded in a series of reports that Syrian government forces were responsible for the use of chlorine barrel bombs against civilians.

Syrian authorities deny having used chemical weapons in the conflict. ISIS has not commented.

"I believe the withdrawal of Russia from the International Criminal Court is because it knows it commits war crimes in Syria and it doesn't want to be accountable," he said.

Promoted
Listen to the latest songs, only on JioSaavn.com
The White Helmets shared the award this year with Egyptian feminist and human rights activist Mozn Hassan, Russia's Svetlana Gannushkina, who campaigns for the rights of migrants and refugees, and independent Turkish newspaper Cumhuriyet.