The European planemaker's UK subsidiary sought to capture the imagination of future engineers by showing off a model of the raptor-like airliner at a military air show in England. 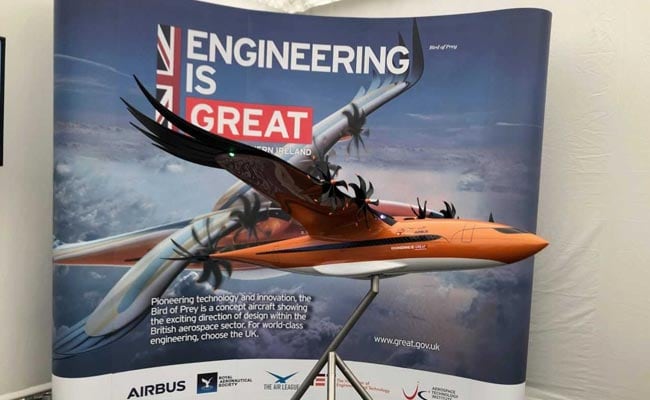 Airbus on Friday unveiled a concept aircraft with splayed wingtips and a fanned tail inspired by the feathers of an eagle as it experiments with "biomimicry" technology that could eventually lead to quieter landings and less pollution.

The European planemaker's UK subsidiary sought to capture the imagination of future engineers by showing off a model of the raptor-like airliner at a military air show in England.

The propeller-driven aircraft would have individually controlled "feathers" on the wingtips to provide what Airbus calls "active flight control" used by an eagle or a falcon.

Also evident is the absence of a traditional vertical tail, relying instead on a split, wedge-shaped tail to reduce drag.

The regional aircraft would carry as many as 80 passengers up to 1,500 kilometres (930 miles) and burn 30% to 50% less fuel than today's equivalent planes, Airbus said.

Inaugurating the display to curious military chiefs and visitors to the Royal International Air Tattoo, Britain's Trade Secretary Liam Fox said it highlighted Britain's technical capability and its attractiveness as a place to invest.

Airbus said its concept plane would have a geodesic or curved fuselage in a throwback to the contours of the Wellington bomber designed by British aircraft designer Barnes Wallis.

That aircraft was built in Broughton in Wales from the 1930s to keep it beyond the range of German bombers.

Airbus now uses the same site to produce wings for over 800 jetliners a year. But it has warned the plant faces competition from European nations such as Germany, or others such as Korea, for future generations following Britain's decision to leave the European Union. Brexit supporters are sceptical Airbus would take such a step given Britain's experience with wingmaking.

(Except for the headline, this story has not been edited by NDTV staff and is published from a syndicated feed.)
Comments
Airbusconcept aircraft