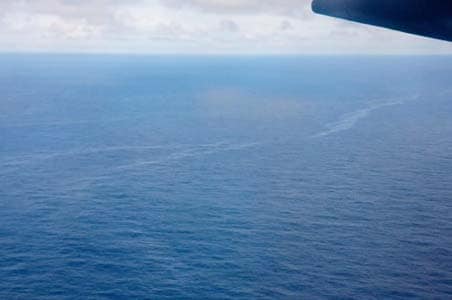 An aeriel view of the oil slick on the sea near Brazil. (AP image)

Search teams are still looking for the Black Box of Air France flight 447, which crashed over the Atlantic on Sunday. The black box is the key to the mystery behind the crash as experts continue to explore many theories.

Meanwhile, the Brazilian Air Force has released images of an oil slick in the Atlantic where the plane is believed to have crashed. The oil slick is spread over a 20 kilometre long area.

Search vessels from several nations are also pushing toward the floating debris, including a seven-metre chunk of plane.

The French Police are also studying passenger lists and maintenance records of the flight and preparing to take DNA from relatives to help identify any bodies.

A group of people believed to be forensic investigators were seen arriving at the hotel where relatives of those onboard the plane are staying.

Rescuers so far found no signs of life after spotting wreckage of the missing plane in the Atlantic Ocean.

If no survivors are found - as feared - it would be the deadliest crash in Air France's history and the world's worst civil aviation disaster since the November 2001 crash of an American Airlines jetliner in the New York City borough of Queens that killed 265 people.