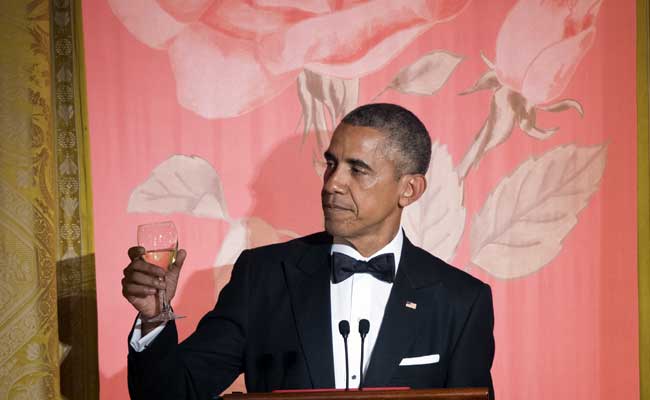 Washington: Barack Obama has said that one of the biggest perks of being the US President is Air Force One and singer Buddy Guy coming to White House with his guitar.

"People sometimes ask me what the biggest perk of being President is. Number one is the plane," Mr Obama said amid laughter at a White House function yesterday in celebration of American creativity.

"Number two is Buddy Guy comes here all the time to my house with his guitar. And then Esperanza brings her bass and stuff happens around here," said the US President.

The event marked the 50th anniversary of the National Endowment for the Humanities.

"This is an eclectic bunch," he said. Creativity, he said, has always played a central role in the life of the nation.

"It is our artists who hold up a mirror to our society, reminding us of our common purpose and our collective obligations," he said.

"Our music in particular has always been an honest reflection of who we really are -- a reflection of our successes and our shortcomings; of our diversity, our imagination, our restlessness; of our stubborn insistence on blending the old with the new, tradition with experimentation," Mr Obama said.

"We have lofty expectations of ourselves, but we don't often do lofty in our music. American music is grounded in the stories of real people living real lives, telling their stories."

"Whether jazz or blues, country or rock and roll, Broadway or hip-hop, it's rooted in records of slavery and segregation, Dust Bowl and Depression, winning wars and coming home, working and losing that proud factory job; tales of hometowns and the hood; always tales of falling in love and having your heart broken," he said.

"In America, we turn life into lyrics."Listen to the lyrics," Buddy Guy once said.

"We're singing about everyday life: rich people trying to keep money, poor people trying to get it, and everyone having trouble with their husband or wife! Except me," Mr Obama said amid applause.