After Tunisia, Egypt, revolts in Yemen 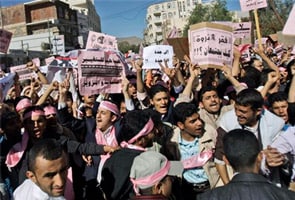 Sanaa: Tens of thousands of people are calling for Yemeni President's ouster in protests across the capital inspired by the popular revolt in Tunisia.

The demonstrations led by Opposition members and youth activists are a significant expansion of the unrest sparked by the Tunisian uprising, which also inspired Egypt's largest protests in a generation. They pose a new threat to the stability of the Arab world's most impoverished nation, which has become the focus of increased Western concern about a resurgent Al-Qaida branch, a northern rebellion and a secessionist movement in the south.

Crowds in four parts of Sanaa have shut down streets and are chanting calls for an end to the government of President Ali Abdullah Saleh, who has been in power for nearly 32 years.

"We will not accept anything less than the president leaving," said independent parliamentarian Ahmed Hashid.

"We'll only be happy when we hear the words 'I understand you' from the president," Hashid said, invoking a statement issued by Tunisian President Zine El Abidine Ben Ali before he fled the country.
Saleh has tried to defuse simmering tensions by raising salaries for the army and by denying opponents' claims he plans to install his son as his successor.

After the Tunisian turmoil, he ordered income taxes slashed in half and instructed his government to control prices. He deployed anti-riot police and soldiers to several key areas in the capital, Sanaa, and its surroundings to prevent riots.

That hasn't stopped critics of his rule from taking to the streets in days of protests calling for him to step down, a red line that few dissenters had previously dared to cross.

Nearly half of Yemen's population lives below the poverty line of $2 a day and doesn't have access to proper sanitation. Less than a tenth of the roads are paved. Tens of thousands have been displaced from their homes by conflict, flooding the cities.

The government is riddled with corruption, has little control outside the capital, and its main source of income - oil - could run dry in a decade.

Saleh's current term in office expires in 2013 but proposed amendments to the constitution could let him remain in power for two additional terms of 10 years.