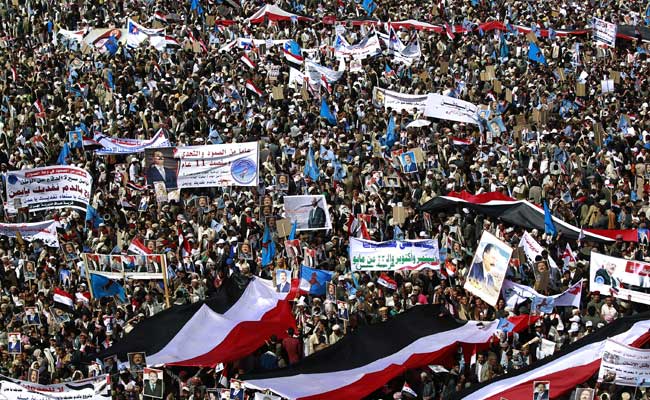 Yemenis wave national flags and hold placards during a protest against the Saudi-led coalition, commemorating one year of the alliance's military campaign against insurgents in the Yemeni capital Sanaa. (AFP photo)

Sanaa, Yemen: Thousands of Yemenis rallied in the rebel-held capital on Saturday to denounce the Saudi-led coalition that launched a military campaign against the country's insurgents a year ago.

The intervention in support of President Abedrabbo Mansour Hadi that began on March 26 last year has yet to deal a decisive blow to the Huthi rebels and their allies, who still control Sanaa and key parts of the country.

"Together against the tyrannical Saudi aggression," said a large banner in Sanaa's Sabaeen Square where protesters gathered, as coalition warplanes flew overhead breaking the sound barrier in an apparent show of force, an AFP photographer said.

Former president Ali Abdullah Saleh, who is allied with the Iran-backed rebels and whose party had called for the protest, appeared briefly at the rally where he reiterated his call for direct talks with Riyadh.

"From here, we extend a hand for peace, the peace of the brave, for direct talks with the Saudi regime without going back to the (UN) Security Council," he said.

Saleh however called on the Security Council to "issue a resolution imposing arms embargo on the Saudi regime," according to the rebel-run Saba news agency.

The veteran leader had in December called for direct talks with Riyadh instead of the government of Hadi.

The Huthis also organised a protest in north Sanaa, where thousands of demonstrators chanted anti-Saudi and anti-US slogans, Saba said.

"One year on, we look at the outcome of this aggression... It was said to be aimed at helping and serving the Yemeni people. (But) this help came in the form of criminal killings and genocide," he said.

"The aggression and those criminal aggressors have only caused huge damage at all levels in our country and in the rest of the region," he added, in an apparent reference to increased tension between regional rivals Saudi Arabia and Iran.

The Huthis seized Sanaa in September 2014 then advanced south, raising fears in Riyadh that the Shiite rebels from Yemen's highlands would extend Iran's influence in its southern neighbour.

Riyadh and its Sunni Arab allies in the coalition vowed to restore Hadi's government to power after he was forced to flee into exile in March last year.

Loyalists backed by the coalition have since managed to drive the rebels out of five southern provinces including second city Aden, where Hadi has established a temporary capital.

But the rebels have stubbornly held on to eight of Yemen's 22 provinces and heavy fighting has been raging for months in five others.

The Islamic State group and Al-Qaeda have exploited the chaos, widening their footholds in the south and carrying out deadly attacks, mostly against forces loyal to Hadi.

IS claimed suicide bombings on Friday on checkpoints of loyalist forces in Aden that killed at least 22 people, including 10 civilians, according to a security official.

The UN says about 6,300 people have been killed in the conflict since the coalition launched its campaign, more than half of them civilians.

International rights groups have repeatedly criticised the coalition for civilian deaths, and urged the United States and other world powers to stop selling arms to Saudi Arabia.

Hopes for a breakthrough in the conflict emerged on Wednesday when UN envoy Ismail Ould Cheikh Ahmed said warring sides had agreed on a ceasefire to be observed before peace talks on April 18.

Previous negotiations have failed and several ceasefires were never respected.

(This story has not been edited by NDTV staff and is auto-generated from a syndicated feed.)
Comments
yemenyemen protests