Angry students have been demanding changes to Bangladesh's transport laws, after two teenagers were killed when a privately operated bus ran over a group of students. 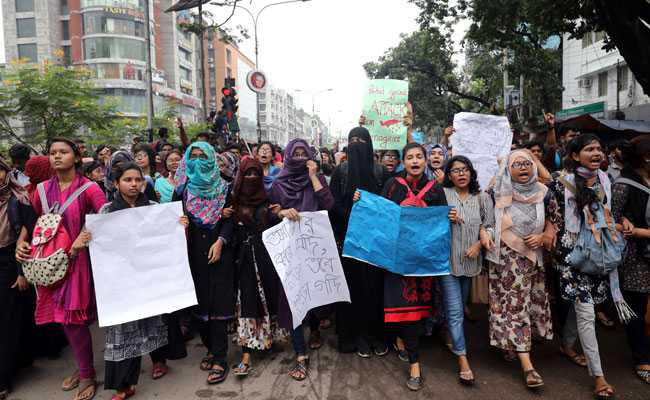 Students shout slogan as they protest in Dhaka after a speeding bus killed 2 teenagers. (Reuters)

Bangladesh's cabinet on Monday will consider capital punishment for traffic accident deaths, a law ministry official said, as thousands of students held protests for a ninth day over the deaths of two teenagers by a speeding bus in Dhaka.

Tens of thousands of angry school and colleges students have been demanding changes to Bangladesh's transport laws, paralysing the crowded capital of 18 million, after the two teenagers were killed when a privately operated bus ran over a group of students on July 29.

"In this amendment it has been proposed to award the highest level of punishment if it is killing by an accident," said the law ministry official, who has been briefed on the matter but declined to be named ahead of a decision.

The current punishment is a maximum jail term of three years. Using the death penalty for road accidents is rare anywhere in the world. Bangladesh's transport authority listed punishments given in different countries that ranged from 14 years in the U.K. in extreme cases to two years in India. https://bit.ly/2ObIBlC

Sheikh Shafi, a student of a polytechnic institute in Dhaka who lost his brother in a road accident in 2015, said one of the problems was that bus drivers are not paid fixed monthly salaries instead only earn commissions based on the number of passengers, forcing them to work long hours.

"Our demand is that the owners must appoint them and they will work a maximum of 10 hours. The commission based system must be eliminated," said Shafi, who was injured while protesting on Saturday.

Amid the ongoing protests, an official vehicle carrying the U.S. ambassador to Bangladesh was attacked by a group of armed men on Sunday, some on motorcycles, the embassy said in a statement. There were no injuries but two vehicles were damaged.

The embassy has condemned the "brutal attacks and violence" against the students protesters by security forces, a charge the government denies.

Police said they did not have an immediate explanation as to why the U.S. ambassador came under attack.