After ISIS Killed Her Sons, Iraqi Grandmother Fends For 22 Children

Iraqi grandmother Sana Ibrahim al-Taee has a full-time job feeding and clothing her 22 grandchildren after ISIS killed their fathers - her five sons. 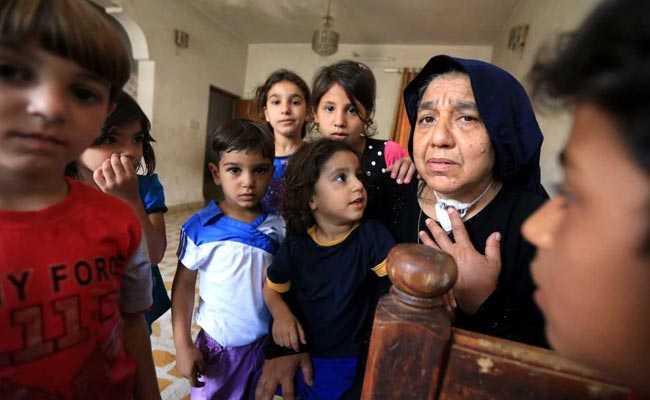 Sana Ibrahim al-Taee whose sons were killed, at her home with her grandchildren in Mosul, Iraq. (Reuters)

Iraqi grandmother Sana Ibrahim al-Taee has a full-time job feeding and clothing her 22 grandchildren after ISIS killed their fathers - her sons - a struggle in a cramped flat with little help from the state.

Al-Taee and her husband, who has Alzheimer's, share their four-room apartment in eastern Mosul with the children, aged between two and 16, their daughter and two of their sons' widows. Rent, food, clothes and schooling depend on donations and charity handouts.

Al-Taee is waiting to hear if the government will provide pensions of 500,000 dinars ($420) a month for her sons, who worked in the military and police.

"I hope that the authorities will give pensions and housing for those orphans, because I am not going to live for 100 years," the 60-year-old told Reuters.

Al-Taee, who is in poor health with vocal cord paralysis, has provided death certificates for three sons but said the other two were buried in mass, unmarked graves and she has not been able to find their bodies.

That means they are classed as missing rather than dead so she has no death certificates for them and cannot apply for their pensions - a common problem for families in the north and west of the country where ISIS controlled vast swaths of territory in 2014.

The terrorists were driven out by U.S.-backed Iraqi troops in December, but the government has said it will need up to $100 billion to rebuild the cities with Mosul's mosques, churches, markets and other landmarks left in ruin.

"When Daesh (ISIS) militants seized our areas, they destroyed us. By God, the terrorists humiliated us. They killed our sons and nothing has remained," al-Taee said.

The two widows living in the cramped home had been working for local civil organisations but left after not being paid. They are now looking for work as servants. ($1 = 1,186.0000 Iraqi dinars)