First National Bank of Omaha, one of the country's largest privately held banks, also announced Thursday the end of a credit-card co-branding deal with the NRA. 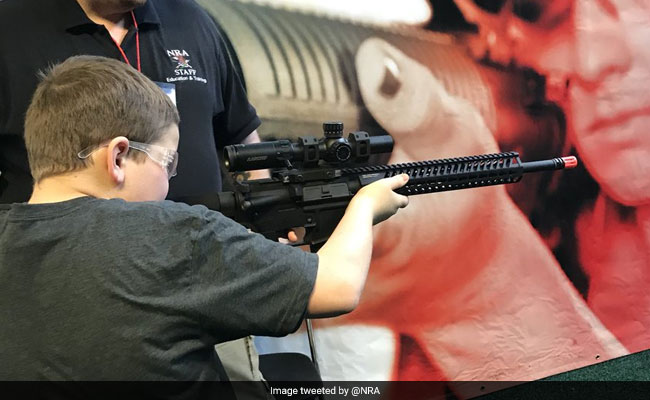 Enterprise - the parent company of car-rental brands Enterprise, Alamo and National - cut ties on Thursday, when it discontinued an arrangement that offered discounts to NRA members.

First National Bank of Omaha, one of the country's largest privately held banks, also announced Thursday the end of a credit-card co-branding deal with the NRA. The bank had issued what its ads described as the "Official Credit Card of the NRA," according to the Omaha World-Herald; the Visa card offered 5 percent back on gas and sporting goods store purchases and a $40 bonus card.

On Friday, Symantec announced in a terse statement on Twitter that it had also ended its discount program with the gun-rights organization. The company, which provides cybersecurity solutions worldwide, had been offering discounts on Norton anti-virus and malware protection, cutting prices on its premium package from $110 to $48 for NRA members.

Separately, insurance company Chubb Limited said Friday that it will stop underwriting "NRA Carry Guard," a policy marketed to NRA members who face legal or civil lawsuits after they shoot someone. A spokesman for Chubb told Reuters that the company informed the NRA of the decision three months ago; the policy has faced criticism from gun-control groups who called it "murder insurance."

The decisions came as the names of companies with NRA associations began circulating widely on the Internet and social media under the #BoycottNRA hashtag after the deadly Valentine's Day attack at Marjory Stoneman Douglas High School in Parkland, Fla.

A gunman wielding an AR-15 rifle killed 17 people and wounded at least 14 others, drawing anguished calls for a ban on assault weapons from students and families.

The mass killing focused renewed attention on the NRA, which is credited with blocking gun-control measures for years through millions of dollars in political campaign contributions and pressure from its large membership base.

American businesses have become increasingly politically aware and have participated in boycotts over the past few years against states over LGBT rights. But the NRA is a well-funded membership operation devoted to a single cause - guns - and unlikely to be moved by the actions of companies with which it has such loose and peripheral ties.

FedEx, for example, gives NRA Business Alliance members up to a 26 percent discount on shipping expenses.

FedEx has not said anything publicly about its NRA association in recent days; when reached around 4:30 ET on Friday afternoon, a company spokesperson said he had no information to provide.

Hashtags urging boycotts of specific companies involved in the deals have sprouted up across social media over the past several days. People then started posting comments on the social media platforms of many of the companies urging them to take action.

The Omaha bank appears to have been the first to respond publicly.

"Customer feedback has caused us to review our relationship with the NRA," the bank said in a statement posted on Twitter. "As a result, First National Bank of Omaha will not renew its contract with the National Rifle Association to issue the NRA Visa Card."

Enterprise followed a few hours later on Thursday. "All three of our brands have ended the discount for NRA members," said a tweet on the Enterprise Rent-A-Car account.

By Friday morning, Symantec had made a similar announcement.

Then came Hertz. On Friday evening, Alice Pereira, a spokeswoman for Avis Budget Group - the company mark for Avis, Budget and Zipcar brands - confirmed that it will no longer provide the NRA member discount as of March 26.

The NRA has not commented on the announcements.

However, the World-Herald quoted Rod Moeller, director of government affairs for the Nebraska Firearms Owners Association, saying that the group will "be giving strong consideration to moving their accounts to a bank that hasn't bowed to political pressure."

Boycott movements have become increasingly effective political tools over the past few years. Indiana got hit hard by threatened boycotts in 2015 when then-Gov. Mike Pence signed legislation allowing businesses and individuals to discriminate on the basis of sexual orientation. The Indiana legislature and Pence reversed the measure within two weeks.

In 2016, North Carolina was the target of a business boycott after it enacted a "bathroom bill" requiring transgender people to use bathrooms based on their assigned gender at birth. After the NCAA canceled tournaments in the state and PayPal decided not to build a new facility in the state, the legislation was partially repealed.

The NRA claims 5 million members and corporate allies in the gun industry that provide the organization with tens of millions of dollars per year. The group devotes massive resources to fighting gun regulations in the name of the Second Amendment to the Constitution, which protects the right to bear arms.

(Except for the headline, this story has not been edited by NDTV staff and is published from a syndicated feed.)
Comments
National Rifle Association