After Drinking A Latte, A Mountain Dew And An Energy Drink, Teen Dies Of 'Cardiac Event'

Davis Cripe passed out on the floor and was rushed to a nearby hospital. By 3:30 p.m., around the time the final bell rang at school, he was dead. 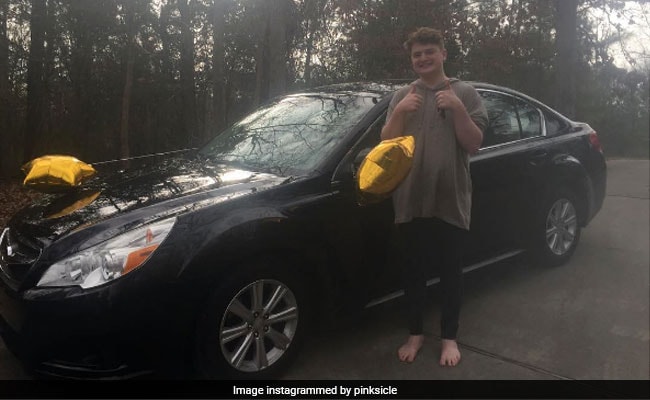 Davis Cripe, a teenage boy died after drinking a Latte, a Mountain Dew and an energy drink

Davis Cripe left home April 26 an active and healthy teenage boy, but in art class that afternoon he fell to his knees and told worried classmates that he felt lightheaded.

He passed out on the floor and was rushed to a nearby hospital. By 3:30 p.m., around the time the final bell rang at school, he was dead.

His sudden death may have remained a medical mystery, the coroner who conducted his autopsy said, if friends at Spring Hill High School in South Carolina hadn't described what Davis ingested during lunch: Enough caffeine to disrupt and ultimately stop his heart.

On Monday, Richland County Coroner Gary Watts told reporters about the troubling - and what he is sure will be controversial - contributing factors in the South Carolina teenager's death, while standing beside Davis' parents.

"He was a great kid," said Davis' father, Sean Cripe. "He didn't get mixed up in the wrong things. You worry about their safety, their health, especially once they start driving. But it wasn't a crash that took his life. Instead it was an energy drink."

In the span of two hours, Davis drank a cafe latte from McDonald's and a large Mountain Dew, then "chugged" a 16-ounce energy drink when he got back to art class, Watts told The Washington Post.

The official cause of death was "caffeine-induced cardiac event causing a probable arrhythmia," Watts said.

Holding a news conference was difficult for Davis' family, Watts said, but the story of a teen who died after legally purchasing drinks containing a drug many believe is safe is "a conversation worth having."

"I'm not saying that you're going to die because you have an energy drink," Watts told The Washington Post. "It's not the level of caffeine in his system, but the amount of caffeine he took in . . . in that short period of time affected his heart."

Watts said it's the first time in his two decades as coroner that he's seen such a case - although he can't say for sure that other, unexplained deaths didn't have similar causes. Davis' friends were key to helping investigators connect the dots.

Watts concedes that there are conflicting opinions about the dangers of caffeine, even among coroners. And he told The Washington Post that caffeine has different effects on different people.

Still, the Palmetto Poison Center issued an advisory Tuesday after the autopsy reports. It pointed to an FDA recommendation that adults don't consume more than 400 mg of caffeine a day - about four to five cups of coffee. Energy drinks contain about 300 mg of caffeine.

The American Academy of Pediatrics says children and adolescents shouldn't consume caffeine at all.

But the poison center's warning wasn't the first, and caffeine-related health problems continue to rise alongside the number of products that promise to efficiently pump caffeine into consumers' bloodstreams.

In 2016, the Energy and Sports drink market had $25 billion in sales, an increase of 7 percent in the past five years, according to a report by the market research company Packaged Facts.

The American Beverage Association, which represents 95 percent of energy drink makers, directs its members to advise consumers that they're not recommended for children, pregnant or nursing women.

It also says the drinks shouldn't be marketed to children and that manufacturers "will not promote excessive or unduly rapid consumption of their energy drink products."

During that period, as The Post's Ariana Eunjung Cha reported, the FDA has investigated the deaths of 13 people that may have been linked to the dietary supplement 5-hour Energy, which contains caffeine. In 2013, the organization got Wrigley to stop making caffeinated chewing gum.

And the FDA has taken aim at the most potent form of caffeine consumers can purchase: bulk bags of the chemical that can cost as little as $10 per pound.

"A single teaspoon can be packed with as much caffeine as 28 cups of regular coffee," Cha reported.

(This story has not been edited by NDTV staff and is auto-generated from a syndicated feed.)
Comments
davis cripeSouth Carolina teenager's deathcaffeine-induced cardiac