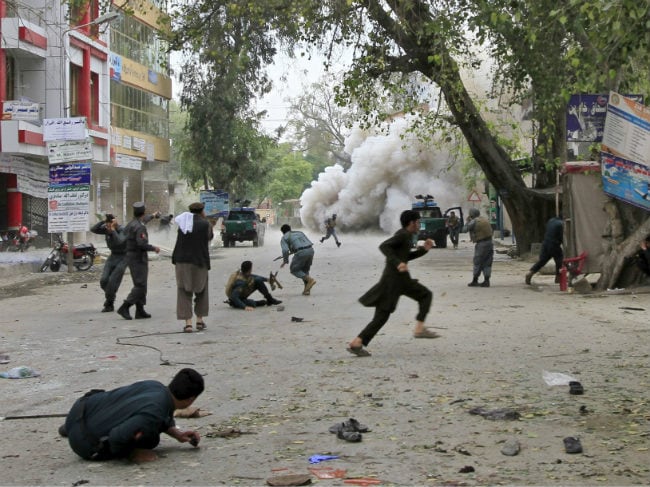 People run for cover after an explosion in Jalalabad April 18, 2015. (Reuters Photo)

Jalalabad, Afghanistan: A suicide bomb blast in Afghanistan's eastern city of Jalalabad killed 33 people and injured more than 100 outside a bank where government workers collect salaries, the city's police chief said on Saturday.

Police were investigating whether there was a second explosion after people rushed to the scene to help, the police chief, Fazel Ahmad Sherzad, told a news conference.

"It was a suicide attack," Sherzad said, adding that police had yet to determine if the attacker had worn the explosives or had placed them in a car. "It is early to say what kind of suicide bomber."

Taliban insurgents denied responsibility, although they have claimed earlier killings in a wave of attacks coinciding with the sharp drawdown of foreign troops.

"It was an evil act. We strongly condemn it," the Islamist terrorists' spokesman, Zabihullah Mujahid, told Reuters.

For the first time since the hardline Islamist Taliban movement was ousted from power in 2001, Afghan forces are fighting with little support from NATO troops.

NATO, which at its peak had 130,000 soldiers in Afghanistan, has only a few thousand left, involved mainly in training and special operations.

Promoted
Listen to the latest songs, only on JioSaavn.com
Police said a third blast that shook Jalalabad was a controlled detonation after experts discovered another bomb close to the scene of the first explosion.