Ban 'Killer' Robots "Before It Is Too Late": Activists Urge UN 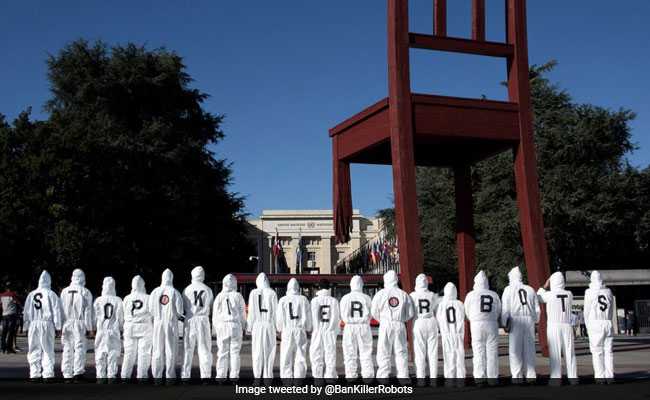 Countries should quickly agree a treaty banning the use of so-called killer robots "before it is too late", activists said Monday as talks on the issue resumed at the UN.

They say time is running out before weapons are deployed that use lethal force without a human making the final kill-order and have criticised the UN body hosting the talks -- the Convention of Certain Conventional Weapons (CCW) -- for moving too slowly.

"Killer robots are no longer the stuff of science fiction," Rasha Abdul Rahim, Amnesty International's advisor on artificial intelligence and human rights, said in a statement.

"From artificially intelligent drones to automated guns that can choose their own targets, technological advances in weaponry are far outpacing international law," she said.

"We are calling on states to take concrete steps to halt the spread of these dangerous weapons... before it is too late."

Her comments came as a CCW group of governmental experts on lethal autonomous weapons systems began a week-long meeting in Geneva.

The world body hosted the first-ever killer robot negotiations last year and India's disarmament ambassador Amandeep Gill, who chairs the CCW talks, told reporters "good progress" had been made since then.

Yet countries have yet to agree on which path to take in addressing such weapons.

The number of states calling for an outright killer robot ban has increased, with campaigners saying at least 26 are now onboard.

But the states believed to have the most advanced autonomous weapons, including the United States, France, Britain and Israel, have not committed to any form of binding mechanism restricting their use.

The way forward is expected to be determined this week or at a broader CCW conference in November, but the requirement to reach consensus could prove a stumbling block.

Activists are pushing nations to move on to formal negotiations on a binding treaty within the CCW.

The Campaign to Ban Killer Robots stressed Monday that without clear progress in that direction, negotiations could also happen outside of the confines of the CCW convention.

"We are willing and able to take it outside of the UN if it is blocked by consensus," campaign member Jody Williams, who won the 1997 Nobel Peace Prize for her work towards a treaty banning landmines, told journalists in Geneva.

Activists meanwhile took heart at growing awareness in the private sector and academia of the threat posed by weapons that entirely rely on machine intelligence in deciding what to kill.

"We have actually seen a lot of action... from the private sector," Peter Asaro, of the International Committee for Robot Arms Control, told reporters.

He pointed in particular to Google's decision in June to fold to pressure from its own employees and retreat from a deal to help the US military use artificial intelligence to analyse drone video.

Amnesty's Rahim meanwhile insisted that "it's not too late to change course."

"A ban on fully autonomous weapons systems could prevent some truly dystopian scenarios."

(Except for the headline, this story has not been edited by NDTV staff and is published from a syndicated feed.)
Comments
Campaign to Ban Killer RobotsUnited NationsAmandeep Gill