Donald Trump said he would announce a new acting homeland security secretary next week, and that there were "many wonderful candidates." 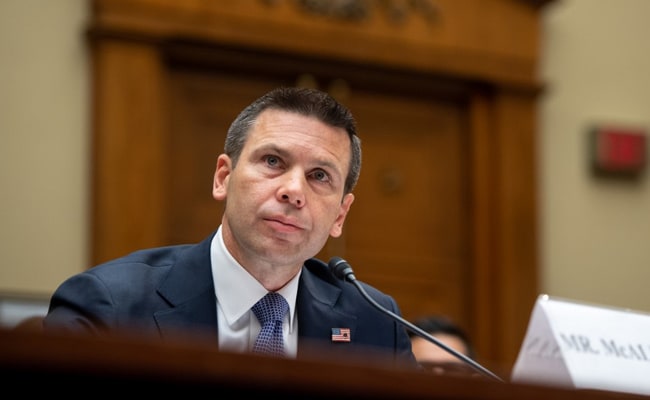 Acting US homeland security chief Kevin McAleenan has resigned, US President Donald Trump announced late Friday, becoming the latest in a long list of top officials to leave the administration.

"Kevin McAleenan has done an outstanding job as Acting Secretary of Homeland Security. We have worked well together with Border Crossings being way down," Trump said in a tweet.

"Kevin now, after many years in Government, wants to spend more time with his family and go to the private sector. Congratulations Kevin, on a job well done!"

McAleenan served in the role for only six months, replacing Kirstjen Nielsen, who sat at the helm of the powerful agency for 18 months.

During McAleenan's brief tenure, the Trump administration stepped up efforts to discourage an exodus of migrants from Honduras, Guatemala and El Salvador by asking Mexico to impede their transit and requiring them to apply for asylum in the first country they enter -- meaning either Guatemala or Mexico.

"I want to thank the President for the opportunity to serve alongside the men and women of the Department of Homeland Security," McAleenan said in a tweet.

"With his support, over the last 6 months, we have made tremendous progress mitigating the border security and humanitarian crisis we faced this year, by reducing unlawful crossings, partnering with governments in the region to counter human smugglers and address the causes of migration, and deploy additional border security resources."

Trump said he would announce a new acting homeland security secretary next week, and that there were "many wonderful candidates."

(Except for the headline, this story has not been edited by NDTV staff and is published from a syndicated feed.)
Comments
US homeland security chiefKevin McAleenanUS President Donald Trump