A Valedictorian Began To Talk About Sexual Misconduct At Graduation. Then Her Mic Was Cut.

Lulabel Seitz had spent the first four minutes of her speech describing some of the challenges that both she and the student body at large had overcome to make it to their high school graduations. 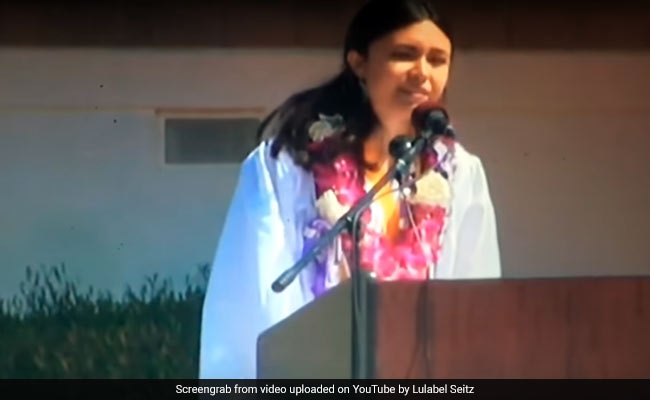 Lulabel Seitz's mic was cut four minutes into her speech at the school's graduation ceremony on June 2.

Washington: Lulabel Seitz had done everything right, at least on paper. As a high school senior with GPA over 4.0, the 17-year-old had been accepted to Stanford University, one of the most prestigious colleges on the West Coast. The first in her family to graduate from high school, she was named valedictorian at Petaluma High School in northern California, an honor that was joined by an opportunity for her to give a commencement speech.

But about four minutes into her speech at the school's graduation ceremony on June 2, the microphone she was speaking into was disconnected.

Seitz had arrived at a part of her speech that touched on sexual assault allegations at the school, without naming anyone in particular, according to a video she later uploaded to YouTube. But school administrators had cut her off at the moment she deviated from a script that she had previously submitted to them, the Santa Rosa Press Democrat reported.

David Stirrat, the principal of the public high school, told The Washington Post by email that students had submitted their speeches for approval, then practiced with a panel. They had been warned that if they went off script, the microphone could be cut off, he said.

Seitz had spent the first four minutes of her speech describing some of the challenges that both she and the student body at large had overcome to make it to their high school graduations. She said that she was the granddaughter of immigrants from the Philippines, and the child of two parents who left high school early and didn't go to college.

"I didn't think I'd be standing here as your valedictorian," she said. "But the reason I share this story with you is not because I think it's unique. In fact quite the opposite. We have all achieved unlikely dreams."

She noted that the school had weathered a teacher's strike and closures during the fires that raged last fall in Sonoma County, which she said had claimed some students' homes.

But it was in her next sentence that school administrators decided to silence. She began it by saying that "the class of 2018 has demonstrated time and time again that we may be a new generation, but we are not too young to speak up, to dream and to create change. Which is why even when some people on this campus, those same people -"

The mic cut off. The video shows the awkward silence that ensued on the field. After a few seconds, a few students in the audience stand and clap, with some beginning to chant, "Let her speak!"

According to the version of the speech that she read later and posted to YouTube, Seitz planned to say: "And even learning on a campus in which some people defend perpetrators of sexual assault and silence their victims, we didn't let that drag us down. The class of 2018 has demonstrated time and time again that we may be a new generation but we are not too young to speak up, to dream, and to create change."

"The Petaluma High School administration infringed on my freedom of speech, and prevented a whole graduating class from having their message delivered," she wrote on YouTube. "For weeks, they have threatened me against 'speaking against them' in my speech. Sometimes we know what's right and have to do it."

The Press Democrat reported that Seitz was frustrated by what she claimed was a lack of action from the administration on a claim of sexual misconduct.

Stirrat said the students were welcome to include potentially controversial material in their speeches.

"In Lulabel's case, her approved speech didn't include any reference to an assault," he said. "We certainly would have considered such an addition, provided no individuals were named or defamed."

Seitz told The Post that she never planned to name anyone - and that it should have been clear to administrators from the tone of her speech.

Dave Rose, an assistant superintendent, told the Press Democrat that he could remember only one other time that administrators had disconnected a microphone during a student's graduation speech in the past seven years, but said he believed it was legal.

"If the school is providing the forum, then the school has the ability to have some control over the message," Rose said.

Public school students do have strong First Amendment protections. But school administrators occasionally cross what scholars have called legal lines, including some who threatened students planning to partake in anti-gun protests with discipline in the wake of the Parkland school shooting.

Seitz completed three years of college classwork at two nearby schools while in high school and was involved in student government, the Press Democrat reported. According to a Google Plus profile, she was a trumpet soloist in the school's jazz band and a school treasurer.


(This story has not been edited by NDTV staff and is auto-generated from a syndicated feed.)
Comments
valedictorian speech cutLulabel Seitz