A Thirsty California Puts a Premium on Water 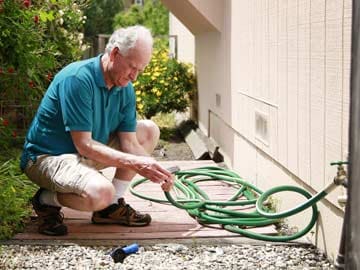 The message to customers: Use more than your allotment, and it will cost you. A lot. Water bills below the allocation run $40 or so. Go above it, and fines pegged to the amount of excess water used will quickly double, triple or quadruple that bill.

"We live in a state where water supplies that are there 100 percent of the time, with 100 percent of reliability, don't exist," said Toby Goddard, the administrative services manager for the Santa Cruz Water Department. "It would be shortsighted of a utility to sell all it has to you now and not have anything for you a year out."

Santa Cruz, whose fresh water supplies come from the shrinking San Lorenzo River and a small reservoir, has gone further than other strapped utilities in embracing the idea of rationing, with fines for those who exceed their allotted shares. But other utilities around the state now have a tiered pricing system. Basic water use comes cheap. Consumption that is compatible with modest landscaping comes at a slightly higher cost. Excessive use comes at premium prices.

California's utilities, like the East Bay Municipal Utility District near San Francisco or the Eastern Municipal Water District in Southern California's sprawling Inland Empire, use their bills to drive home the ethic of conservation. "Thirty years ago, everybody took costs and divided by anticipated sales and found an average rate," said Tim Quinn, the head of the Association of California Water Agencies, or ACWA.

"We haven't lived in that world for over 30 years."

The message irritates some people, particularly those with mansions surrounded by lush lawns and ornamental plantings. One person from a district just south of here was playing golf with Quinn at a Monterey country club recently. When he learned that his golf partner worked in water services, the man complained bitterly about his $5,000 monthly bill. Quinn replied, "I think your water agency is trying to tell you something."

In some places, that message has become more personal. Starting about two decades ago, in water districts in Southern California like Irvine Ranch and San Juan Capistrano, rate-setters decided that the fairest way to encourage conservation was to assess how much each individual account needed and then to set tiers. A family with six children needed more essential water than a family with two; a house in a warm, dry microclimate needed more than a house shrouded in fog.

This process of water "budgeting" is now in place in 20 of the more than 700 California water districts, and it is spreading fast. "It's what everyone is shifting toward," said Abby Figueroa, a spokeswoman for the East Bay Municipal Utility District.

"It's based on efficiency. Those who are inefficient pay more," said Paul D. Jones II, the general manager of the Eastern Municipal Water District.

Water budgeting, known in the industry as "allocation pricing," may violate California law, which requires that the cost of a government service like water delivery be based on the cost of providing the service. But its cousin, tiered pricing, has suffered a legal setback. In August, an Orange County judge ruled that San Juan Capistrano's water agency had not sufficiently tied its establishment of water tiers to the cost of serving those tiers.

The consulting firm Raftelis Financial Consultants is working with the agency to establish a legally defensible link between the newly adjusted tiered pricing and the cost of providing pipes, water storage and other services. Sanjay Gaur, a manager for Raftelis, said that, in general, as monthly water bills around the state had increased to almost $50 from about $30, customers were noticing.

"The water industry in the past has been hidden - people didn't know where they got their water," Gaur said. "Now, because of the drought, things are going to another level. People are going to pay more attention."

In Santa Cruz, they have been paying attention for years. Conservation has been a way of life here for a generation, since a bad drought in the late 1980s. Now, in the summer months, the Santa Cruz water district sends, on average, a total of 188 million gallons a month to its 21,700 residential customers - 94,000 people. In the winter months, it sends 131 million gallons.

These amounts represent about a 30 percent drop from what was used in 1987, before the last major drought. Paradoxically, conservation has been so ingrained, Goddard said, that it is difficult for customers to find ways to save more. The new limit on monthly residential use is less than 7,500 gallons.

Local residents want to help - though they may not want to pay more.

"We've used too much water for too long. We've become wasteful," said Marilyn Berg, 76, who with her husband, Joe, owns a three-bedroom, 3 1/2-bath, two-story home in town that is frequently rented.