Around the world - from Chicago to Munich to Roskilde, Denmark - airports have become centers of political protest over deportations. 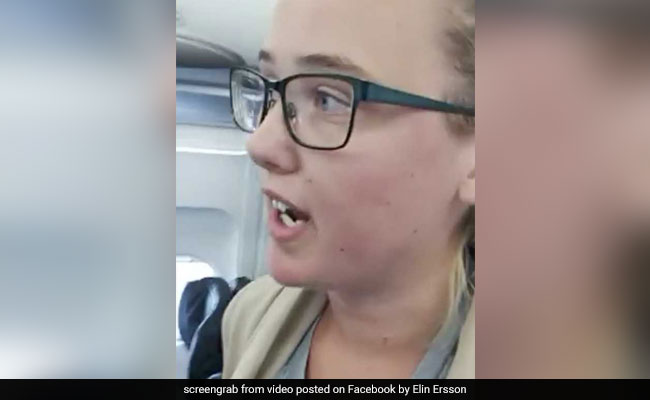 Around the world - from Chicago to Munich to Roskilde, Denmark - airports have become centers of political protest over deportations. Activists have blocked airport entrances, demonstrated outside terminal fences, and even stormed a runway in attempts to stop flights carrying deportees.

This week, one Swedish student tried a different approach. When Elin Ersson learned that an Afghan man was scheduled to be deported from Sweden on Monday, she bought a ticket for the same flight. Once she boarded the plane at Gothenburg airport, Ersson refused to take her seat, standing in the aisle, until the 52-year-old deportee was released.

Her dramatic act of civil disobedience, which she live-streamed on Facebook in English, forced the flight to be delayed by two hours, according to Swedavia, the company that operates the airport. Ultimately, her efforts succeeded - at least for the time being. The Afghan deportee was escorted off the plane before it took off.

"I'm not going to sit down until this person is off the plane," Ersson said on the Facebook live video, which has now been viewed more than 2 million times. "The pilot has the right to say that he is not allowed to be on the plane."

If the man were deported to conflict-ridden Afghanistan, she told the people around her, "he will most likely get killed." As she continued filming and refusing to take her seat, passengers and flight attendants are heard on the video growing increasingly frustrated.

"Sit down, we want to go," one voice is heard saying.

"I don't want a man's life to be taken away just because you don't want to miss your flight," Ersson responds. She insists that what she is doing is perfectly legal. She films only her face, rarely showing the faces of those around her, out of privacy concerns.

The flight attendant says the crew is "not authorized to do something like this," because the deportee was being accompanied by Swedish authorities. "

One passenger is heard angrily urging her to stop, telling her she's "upsetting all the people down there. " "I don't care what you think. . ...what about all these children you are frightening?"

He grabs Ersson's phone away from her before a flight attendant returns it.

"It's your country's rules," another passenger tells her.

"I'm trying to change my country's rules," she responds. "It's not right to send people to hell."

"But you're preventing all these customers from going to their destination," the man says.

Children can be heard crying, and passengers can be seen crowding the aisles as the 14-minute video progresses. But others on the flight appear to support her efforts. A group of passengers begins applauding Ersson. "We are with you," one Turkish man says to her. Ersson begins to cry as she sees a soccer team at the back of the plane stand up.

"I don't know if they're trying to listen what I'm saying, but as long as they are standing, this plane is not allowed to go," she says.

By the end of the video, a flight attendant is heard telling Ersson that "both you and that passenger will not fly."

As the 52-year-old deportee was escorted off the plane, Ersson left on her own accord, Hans Uhrus, press officer for Swedavia Airports, told The Washington Post.

It is not clear what happened to each of them after they left the plane, but the deportation was "interrupted," Ersson wrote on Facebook.

"There was only one person on this flight today but there will be more," she is heard saying on the video.

According to German news outlet Deutsche Welle, Swedish authorities confirmed the Afghan man remained in custody and would eventually be deported.

Despite Ersson's claims that her protest was legal, police authorities told DW that she could face fines or even jail time for refusing to obey a pilot's orders while on a plane.

As the video of Ersson's protest circulated on social media, some viewers criticized her for obstructing the flight and delaying scores of passengers. But others praised her for her bold efforts.

"We may not know all the details about the case but I am astonished at her bravery, compassion and determination to save a man's life," one supporter wrote on Twitter.

"You have sent us all a message to stand up in what we believe in and not shy away from what is right," wrote another.

Afghans continue to be among the largest groups of asylum seekers. Between the first quarter of 2017 and the first quarter of this year, European Union countries received 37,795 first-time asylum applications from Afghanistan, according to EuroStat. Only Iraq and Syria had higher numbers.

Afghanistan continues to face deadly attacks by the Taliban and Islamic State. Civilian casualties in Afghanistan totaled 2,258 in the first quarter of the year, a near-record level, according to U.N. officials.

Earlier this month, Germany's interior minister came under fire for reveling in the deportations of 69 Afghan asylum seekers on his 69th birthday. Days after one of those refugees was forcibly returned to Kabul, he was found dead in his hotel. He apparently killed himself.