A New Theory Behind Tsunami Earthquakes 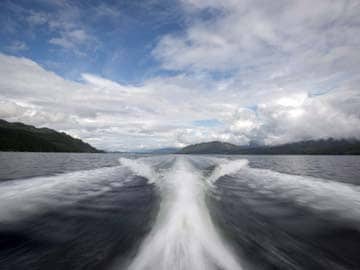 London: Extinct undersea volcanoes may cause a rare type of earthquake that triggers powerful tsunami waves, according to a new finding that may lead to improved detection measures.

Tsunami earthquakes happen at relatively shallow depths in the ocean and are small in terms of their magnitude.

However, they create very large tsunamis, with some earthquakes that measure 5.6 on the Richter scale generating waves that reach up to ten metres when they hit the shore.

A global network of seismometers enables researchers to detect even the smallest earthquakes.

However, the challenge has been to determine which small magnitude events are likely to cause large tsunamis.

The study shows that tsunami earthquakes may be caused by extinct undersea volcanoes causing a "sticking point" between two sections of the Earth's crust called tectonic plates, where one plate slides under another.

The researchers from Imperial College London and GNS Science in New Zealand used geophysical data collected for oil and gas exploration and historical accounts from eye witnesses relating to two tsunami earthquakes, which happened off the coast of New Zealand's north island in 1947.

"Tsunami earthquakes don't create massive tremors like more conventional earthquakes such as the one that hit Japan in 2011, so residents and authorities in the past haven't had the same warning signals to evacuate," said Dr Rebecca Bell, from Department of Earth Science and Engineering at Imperial.

The team located two extinct volcanoes off the coast of Poverty Bay and Tolaga Bay that have been squashed and sunk beneath the crust off the coast of New Zealand, in a process called subduction.

The researchers suggest that the volcanoes provided a "sticking point" between part of the Earth's crust called the Pacific plate, which was trying to slide underneath the New Zealand plate.

This caused a build-up of energy, which was released in 1947, causing the plates to "unstick" and the Pacific plate to move and the volcanoes to become subsumed under New Zealand.

This release of the energy from both plates was unusually slow and close to the seabed, causing large movements of the sea floor, which led to the formation of very large tsunami waves.

All these factors combined, said the researchers, are factors that contribute to tsunami earthquakes.

Promoted
Listen to the latest songs, only on JioSaavn.com
The researchers believe the information they've gathered on these events could be used to locate similar zones around the world that could be at risk from tsunami earthquakes.

The study was published in the journal Earth and Planetary Science Letters.