The blast was allegedly targeted at police personnel. 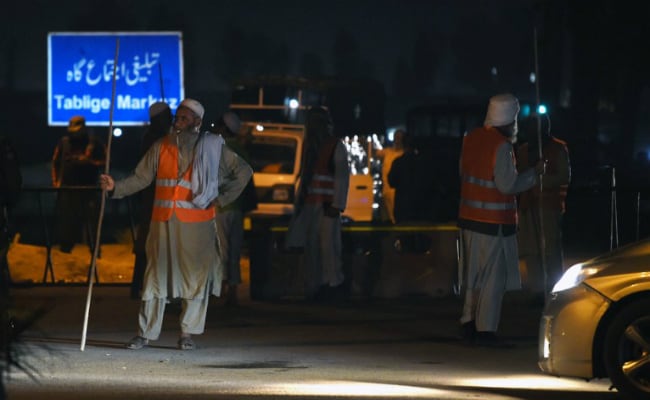 Volunteers stand guard at the blast site in Lahore (AFP)

According to rescue officials, the blast took place close to a check post, a few kilometers from the palatial residence of the Sharif family, and next to the congregation of the Tableeghi Jamaat centre. Around 25 people were also injured in the attack.

"Five policemen - two inspectors and three constables - are among nine persons killed in the blast. Around 14 policemen among the 25 who were injured in the blast. The condition of four policemen is stated to be critical," Rescue 1122 spokesman Jam Sajjad told PTI.

He said the Rescue ambulances have shifted the injured to the Sharif medical complex and other nearby hospitals.

Inspector General Police Punjab Arif Nawaz confirmed that the blast was a suicide attack carried out by a teenager who blew himself up near the checkpost.

Deputy Inspector General Police Lahore Dr Haider Ashraf said: "A teenaged boy blew himself up at the check post set up close to the Tableeghi centre where at least 14 or so cops were present".

However, he did not give the exact age of the boy.

He said the "police personnel" were the target of the blast. "The condition of some policemen is critical," he said.

It was such a powerful blast that its sound was heard several kilometers from the site. A fire ball was seen after the blast at the Nisar Police Check Post.

Some reports said Tahreek-i-Taliban Pakistan has claimed the responsibility of the blast. The suicide attack has taken place a week before the semi-finals of the Pakistan Super League in Lahore.

"The PSL semi-finals will be held in Lahore as per schedule as we have made all security arrangements in this regard," Ashraf said.

Promoted
Listen to the latest songs, only on JioSaavn.com
Pakistan Rangers quick response force has reached the spot and cordoned off the area along with the police.

This is the first explosion targeting the provincial capital in 2018. Lahore experienced multiple terror attacks in 2017 that killed more than 60 people.