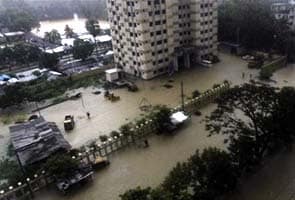 Dhaka: Days of incessant rain in Bangladesh, some of the heaviest in years, have set off flash floods and landslides, killing at least 70 people and stranding about 200,000, police and officials said on Wednesday.

Low-lying and densely populated Bangladesh is battered by torrential downpours during the wet season, which began in the past few weeks.

At least 15 people were killed in and around the south-eastern port city of Chittagong, while 30 died in Bandarban in an area known as the Chittagong Hill Tracts.

A further 24 died in the coastal district of Cox's Bazar near the Myanmar border, officials and police said.

Most of the deaths were caused by landslides, others by wall collapses, lightning strikes and surges of water. Army, police and fire brigade personnel were helping in rescue efforts.

In Sylhet, a rice and tea growing area in the northeast, houses stood up to three feet (one metre) under water, with residents perched on boats or scrambling to high ground. Three children were reported killed.

Five days of rain had beset wide areas near the border with Myanmar and India, with the weather office recording 463 mm (18.2 inches) in Chittagong over the past 24 hours.

"We are having the worst rainfall in many years," said Jainul Bari, district commissioner for Cox's Bazar.

Weather officials said more heavy rain was expected in the next few days.

Disaster control officials said about 150,000 people had been marooned by the floods in the southeast while 50,000 were stranded in Sylhet.

Hundreds of homes have been washed away, while authorities moved hundreds of families from shanty housing and told others to leave quickly.

Agriculture officials said it was too early to estimate crop damage. "In flash floods, water recedes soon after the rain stops, so we don't anticipate any major damage to rice and other crops," one official said.

Most road and rail links between Chittagong and the rest of the country were suspended late on Tuesday, while Chittagong airport was closed after water inundated part of the runway.

© Thomson Reuters 2012
Promoted
Listen to the latest songs, only on JioSaavn.com