Nikki Haley, 46, announced on Tuesday that she would resign from her post as the US ambassador to the UN effective at the end of 2018. 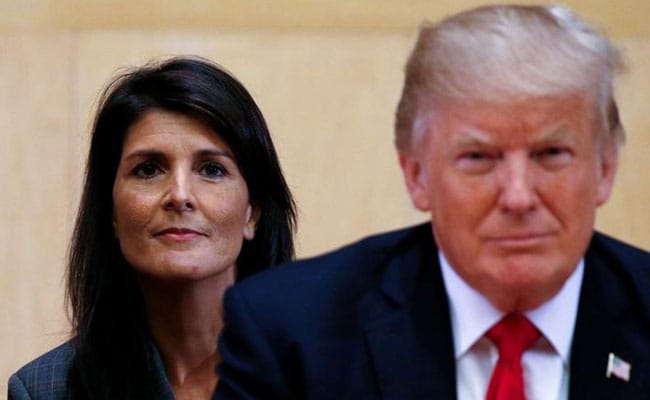 US President Donald Trump has said he has five persons in mind, including his former deputy national security adviser Dina Powell, to replace Indian-American Nikki Haley as the US ambassador to the UN.

Ms Haley, 46, announced on Tuesday that she would resign from her post as the US ambassador to the UN effective at the end of 2018.

Ms Haley's abrupt decision left many in the White House in shock as there was no indication that she planned to leave office. Haley had submitted her resignation on October 3.

Doanld Trump said Ms Haley would assist in the search for her replacement, and that he plans to settle on a pick in the next two to three weeks.

Speaking to reporters aboard Air Force One, Donald Trump identified only one person on the list.

He said Ms Powell is on the short list of five persons.

President Trump told reporters "we have actually many names... Nikki is going to help us with the choice. I've heard a lot of names."

Ms Powell served in the first year of the Trump administration as the Deputy National Security Adviser for strategy, and was a key player in diplomatic efforts in the Middle East.

She returned to Goldman Sachs, where she worked for more than a decade, earlier this year. She also was a high-ranking official in the State Department of the previous Republican president, George W Bush, according to the Harvard Kennedy School, where she is a senior fellow.

She was instrumental in planning all of Donald Trump's overseas trips as well as his debut at the UN  General Assembly in September 2017.

"Nikki is a great friend of mine. We've become real friends over the last period of time. But she's done a fantastic job. And so she'll be involved. And Dina, certainly. And there are others. I've heard a lot of names," he said.

Donald Trump said that Nikki Haley would be involved with the administration for a long time even after resigning from the diplomatic position.

"Nikki is going to be involved with us for a long time. And she's going to help me also make that final pick. We're going to make a final pick. I want to get somebody really good," Donald Trump told reporters at the White House.

Ms Haley, the highest ranking Indian-American in the Trump administration, has agreed to stay till year end as the top American diplomat to the UN.

Ms Haley, he said would be helping him in his 2020 re-election bid.

Responding to a question, Donald Trump said Nikki Haley supported someone else over him in the primary for the 2016 presidential election.

"It turned out very well for me. She respected it. And after that, we got along, as you would say, very well. She helped me in the election, once I won the primaries. And we've really been friends and we've been compatriots. We've done a great job together," he said.

"You know, the United Nations is at, I think, really a new level of respect. And we work together. We had a tremendous week last week. So, no, Nikki wants to work with us and also to keep it going. She wants to work -- I guess she said today, a few times, she wants to work on the 2020 election with us," Donald Trump said.

"Rick Grenell is someone I would consider," President Trump said, referring to the US ambassador to Germany. But he added that Grenell was not on his short list of five candidates, saying he's doing well in his current post: "I'd personally like to keep Rick where he is."

Along with Powell, other names being floated to replace Ms Haley include US Ambassador to Russia Jon Hunstman and Acting Under Secretary for Public Diplomacy and Public Affairs Heather Nauert, Fox News reported.

Donald Trump had also suggested the name of his daughter Ivanka, but later said he would be accused of nepotism if he selected her.