Firefighters standing on a ladder to extinguish a fire in an apartment building in Saint-Denis, north of Paris. (AFP Photo/Paris Fire Brigade)

PARIS: At least five people were killed and two others seriously injured in a building fire in a suburb of Paris on Monday evening, the fire service said.

A further nine people had less serious injuries following the blaze in Saint-Denis, to the north of the French capital, a spokesman said.

Firefighters at the scene were unable to identify the victims found in the rubble because of the severity of the blaze, the spokesman added.

Two of the injured had jumped out of the four-storey building to escape the fire but they were not in a critical condition, a statement published by the Paris fire service and the Seine-Saint-Denis prefecture said. 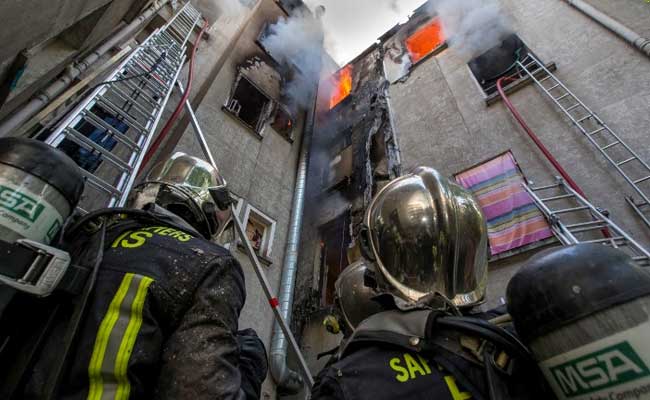 "The fourth floor of the building collapsed onto the third and the staircase is still weakened," the fire service spokesman added.

"We don't know where the fire began," deputy mayor for housing Stephane Peu told AFP after visiting the scene.

The building was in the centre of Saint-Denis and had not been flagged as unsafe, he said.