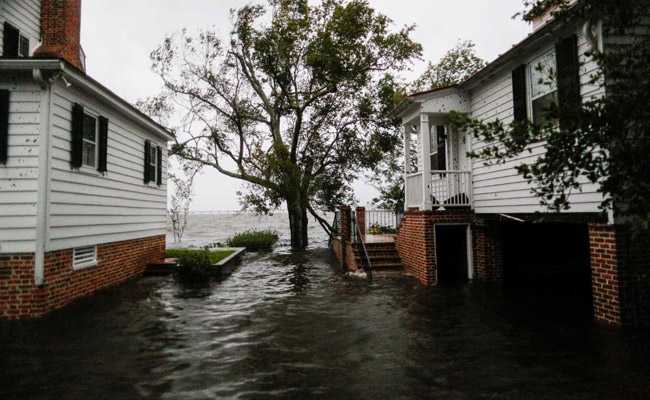 Tropical storm Florence lumbered inland on Saturday, knocking down trees, flooding rivers, and dumping sheets of rain in the Carolinas where five people have died.

It diminished from hurricane force as it came ashore, but forecasters said the 350-mile-wide storm's slow progress across North and South Carolina could leave much of the region under water in the coming days.

"This storm is relentless and excruciating," North Carolina Governor Roy Cooper told CNN late on Friday. "There is probably not a county or a person that will not be affected in some way by this very massive and violent storm."

A mother and baby were killed when a tree fell on their home in Wilmington, North Carolina. The child's injured father was taken to hospital. In Pender County, a woman died of a heart attack; paramedics trying to reach her were blocked by debris.

Two people died in Lenoir County. A 78-year-old man was electrocuted attempting to connect extension cords while another man died when he was blown down by high winds while checking on his hunting dogs, a county spokesman said.

In New Bern, North Carolina, the storm surge overwhelmed the town of 30,000 which is located at the confluence of the Neuse and Trent rivers.

Officials in New Bern, which dates to the early 18th century, said more than 100 people were rescued from floods and the downtown was under water by Friday afternoon. 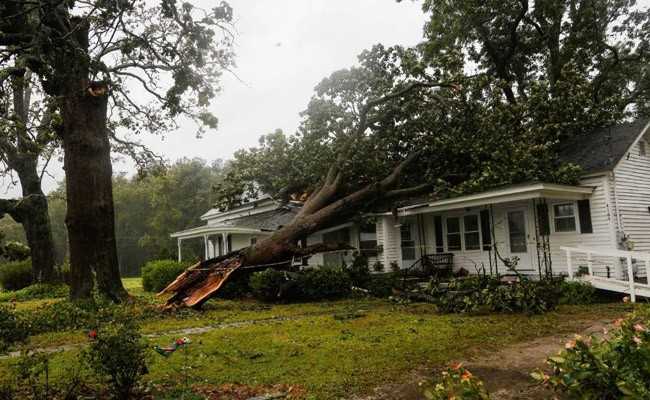 A downed tree rests on a house during the passing of Hurricane Florence in the town of Wilson, North Carolina (Reuters)

Resident Jay Manning said he and his wife watched with alarm as water filled the street.

"We moved all the furniture up in case the water comes in but the water seems to be staying at the edge of the driveway," he said, adding that if the wind picks up and the rain keeps coming, that could change. "My wife's in a panic right now."

Dan Eudy said he and his brother were awakened on Thursday night by the sound of a boat ramming against his front porch.

Eudy said his family stayed in their home partly to protect their house. "And we had no belief it would be as significant an event as it was," he said. "This is a 500- or 1,000-year event."

Florence was a Category 3 hurricane on the five-step Saffir-Simpson scale with 120-mph winds on Thursday. It was downgraded to a Category 1 hurricane before coming ashore near Wrightsville Beach close to Wilmington, North Carolina.

The National Hurricane Center (NHC) downgraded it to a tropical storm on Friday, but warned it would dump as much as 30 to 40 inches (76-102 cm) of rain on the southeastern coast of North Carolina and part of northeastern South Carolina.

About 10 million people could be affected by the storm. 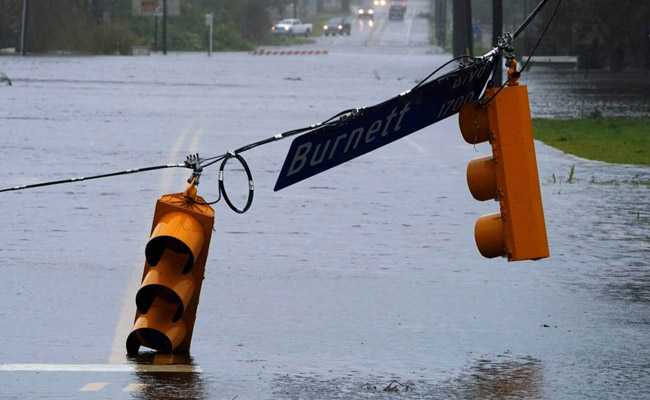 A street light is downed on a flooded road as Hurricane Florence comes ashore on Wilmington, North Carolina (Reuters)

Atlantic Beach on North Carolina's Outer Banks islands had already received 30 inches of rain, the U.S. Geological Survey said, while more than 25 inches have fallen in the Newport, Morehead City area since Thursday.

North Carolina utilities estimated that as many as 2.5 million state residents could be left without power, the state's Department of Public Safety said.

The White House on Saturday said President Donald Trump had approved making federal funding available in some counties. Trump, who spoke with state and local officials on Friday, plans a visit to the region next week.

Florence was moving west-southwest at about 5 mph (7 km/h), with its center located over eastern South Carolina. The storm is expected to turn west and then north moving through the Carolinas and the Ohio Valley by Monday, the NHC said early on Saturday.

The storm was expected to become a tropical depression on Saturday and significant weakening was expected over the weekend, the NHC said in a bulletin.

Florence was one of two major storms threatening millions of people on opposite sides of the world.

Super Typhoon Mangkhut tore through the northern tip of the Philippines on Saturday packing winds of more than 200 km per hour (124 mph) along with torrential rain, killing three people and causing floods, landslides and power outages.

(Except for the headline, this story has not been edited by NDTV staff and is published from a syndicated feed.)
Comments
Tropical storm FlorenceHurricane FlorenceFlorence in United States