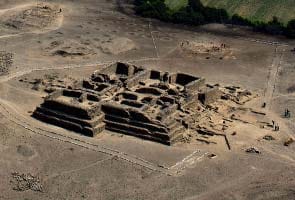 Rafael Varon, deputy minister of cultural patrimony, told reporters the destruction occurred over the weekend at the ruins of El Paraiso, a few miles (kilometers) north of Lima.

He said Wednesday his agency has lodged criminal complaints against the two companies for the weekend's damage, identified as the Alisol and Provelanz, and has moved to seize the equipment used. People who answered the telephone at both companies said no one was available to comment.

Peru's tourism ministry says El Paraiso was built some 4,000 years ago and was a religious and administrative center, long before the rise of the Inca culture encountered by the Spanish conquerors.

Marco Guilen, director of an excavation project at El Paraiso, said the people who tore down the pyramid "have committed irreparable damage to a page of Peruvian history."

"We are not going to be able to know in what ways it was constructed, what materials were used in it and how the society in that part of the pyramid behaved."

Varon said people apparently working for the two companies tore down one pyramid and tried to destroy three others, but were stopped by witnesses.

Mayor Freddy Ternero from the town where the ruins are located, San Martin de Porres, said the pyramids were located in agricultural fields and were not guarded, though he said the Minister of the Interior sent police to protect it after the incident.
Comments
Peru Pyramid