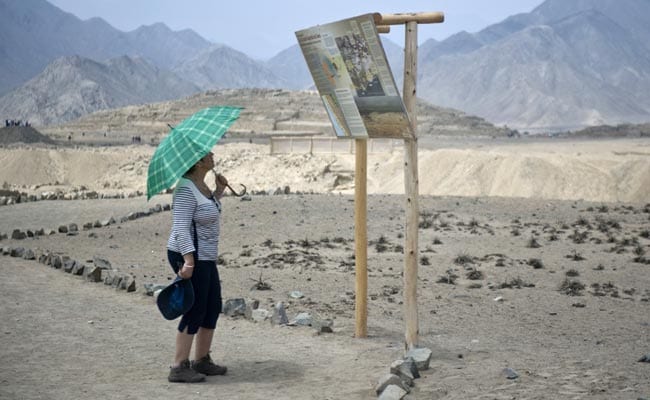 A tourist watches an information panel at the Caral archaeological complex, in Supe-Peru on November 8, 2015. (AFP)

Caral, Peru: Architects seeking solutions for sustainable living in the 21st century are taking notes from the ancient city of Caral in Peru, an engineering marvel built some 5,000 years ago.

Caral's builders created a city of pyramids, sunken amphitheaters, seismically resilient buildings and underground ducts that channeled the wind to keep their fires burning all with basic tools.

It was the site of the oldest known civilization in the Americas, the Caral or Norte Chico civilization, which developed from 3000 to 1800 BC almost as old as Ancient Egypt.

Today, architects from around the world have convened in Caral to seek inspiration in its sandy brown ruins and discuss the challenges facing humankind five millennia later.

The International Union of Architects met at the UNESCO World Heritage Site last weekend and signed a document called the Caral Letter, which hails the ancient city as an example of sustainable urban planning and living in harmony with nature.

The letter from the 124-nation group will be presented next month at high-stakes UN climate talks in Paris, where countries will seek a comprehensive agreement on curbing the carbon emissions warming the planet.

The world's architects had previously met in Athens in 1933 to sign a landmark manifesto on urban planning and in Venice in 1964 to call for the preservation of the world's monuments.

"We turn to the past to see how civilization was organized 5,000 years ago, thinking about their commitment to nature, their cosmic vision," said Jose Arispe, one of Peru's leading architects and an adviser with the International Union of Architects.

He marveled at engineering feats like the ducts Caral used to supply air to fires used in religious ceremonies and keep them burning. The system relies on what physicists now call the Venturi effect, the reduction in pressure when a fluid flows through a constricted space.

"We are rediscovering the work of architects and engineers at the
time, when there were no instruments like the level or the plumb line. It's high engineering," he told AFP.

Buildings in the city, which is in a seismically active area, also feature flexible foundations called "shicras" that resemble large baskets filled with stones a technique to minimize earthquake damage.

Caral's inhabitants apparently had no weapons and no city walls to keep out neighboring peoples.

"It was a peaceful culture and serves as a reference for future generations," said Arispe.

They also built the city on arid land to preserve fertile ground for farming.

"This society was very interested in developing in harmony with nature. They never occupied the valley, they didn't settle on productive land. Fertile fields were deities," said Peruvian archaeologist Ruth Shady, who conducted the first excavations at Caral in 1996 and brought the site to world attention.

'Message for the world'

Caral sits in the Supe Valley, in a semi-arid region about 200 kilometers (125 miles) north of Lima, just inland from the Pacific Ocean.

The horizon is dominated by seven stone pyramids that appear to light up in the sun.

The city is built around two sunken circular plazas, and excavations indicate there were regular markets that drew traders from across a wide region.

Fishermen and farmers would trade their goods for flutes made of condor bones, or for shells from as far away as modern-day Ecuador to make necklaces.

Digs to uncover more of the site's history are ongoing.

The city may also have been the birthplace of Quechua, which became the language of the subsequent Inca empire and is still alive today.

"This is a civilization that achieved splendor and prestige. That's the message for the world: We can live in harmony with nature to protect the planet and have respectful, peaceful relations with other cultures," said Shady.

Caral was hit by a long drought around 1800 BC, forcing residents to abandon the area. After they left, the city was buried in sand.