4 New Fires Break out at Tianjin Warehouse Site in China 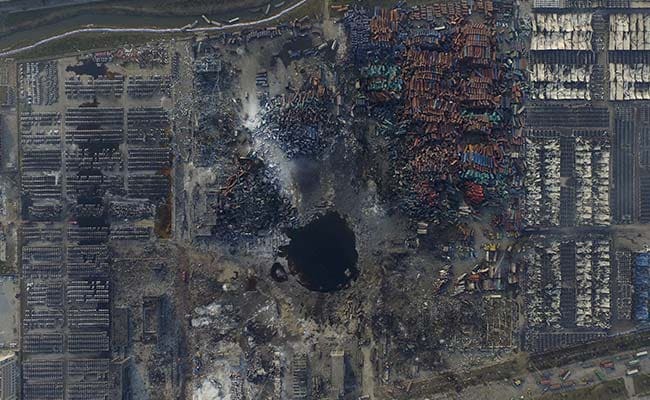 An aerial picture of the site of explosions at the Binhai new district, Tianjin, China, August 16, 2015. (Reuters)

The explosions in a warehouse storing dangerous chemicals devastated an industrial park in the northeastern port city of Tianjin late on August 12. More than 700 people were injured and thousands were evacuated because of the risk posed by chemicals stored at the site.

The official Xinhua news agency said today rescue crews were rushing to the site after four new fires broke out. It said one of the "combustion points" was in a logistics site for automobiles near last week's blast.

The other three were within the central blast area, it said without giving any explanation of the cause of the fires.

State authorities have confirmed that more than 700 tonnes of the deadly chemical sodium cyanide were stored at the Tianjin warehouse that blew up.

Nationwide inspections of facilities handling dangerous chemicals and explosives were ordered by China's State Council after the blasts last week.

More than 100 chemical firms across seven provinces have been told to suspend operations or shut down due to safety violations in the recent days, announcements by regional governments show.

That includes 19 companies in Hubei province, 26 firms in Anqing city in the southeastern province of Anhui, two in the capital, Beijing, and 39 in Zhejiang province.

The State Council said in a statement on Thursday that advanced equipment and the best expertise must be used to prevent major environmental incidents in the future.

Pictures taken by Reuters on Thursday showed workers scooping thousands of dead fish out of the Haihe river near Tianjin, a day after authorities had declared the city's drinking water was safe.

Tianjin officials said the dead fish were caused by regular seasonal low oxygen levels in the water and were not related to the blasts.

Authorities however have also warned that cyanide levels in waters around Tianjin port, the world's 10th-busiest and the gateway to China's industrial north, had risen to as much as 277 times acceptable levels.

The blasts at Tianjin also prompted a nationwide review of China's industrial safety record, which has struggled to keep pace with the breakneck speed of China's economic growth.

China has struggled in recent years with incidents ranging from mining disasters to factory fires, and President Xi Jinping has vowed that authorities should learn the lessons paid for with blood.

Executives of Tianjin Dongjiang Port Ruihai International Logistics, the firm whose warehouse exploded, have said they used connections to obtain safety approvals. The site was found to be too close to nearby homes.

Inspectors carrying out the safety reviews in Beijing found that security personnel at a branch of Sinopec Corp, Asia's largest refiner, were unfamiliar with how to handle an oil tank fire, Xinhua said. Employees were also found smoking in dormitories near the facility, it said.

"Companies that fail our inspections will be ordered to suspend operations, and their warehouses will be put under 24-hour surveillance," Xinhua quoted Qian Shan, vice-head of the Beijing work safety bureau, as saying.

Despite the infractions found at the Sinopec branch, Xinhua did not say that the facility would be shut.

Beijing has also suspended operations at firms that make or deal in highly toxic chemicals and explosives from August 17 to September 6 in preparation for a military parade and athletics event, Xinhua said.

On Wednesday, three oil and gas firms close to residences were told by authorities in the cities of Hangzhou and Shenzhen to halt operations.
© Thomson Reuters 2015