32 Killed, Over 100 Injured As Two Trains Collide In Egypt

A statement said dozens of ambulances rushed to the scene in the Tahta district of Sohag province, some 460 kilometres (285 miles) south of the capital Cairo. 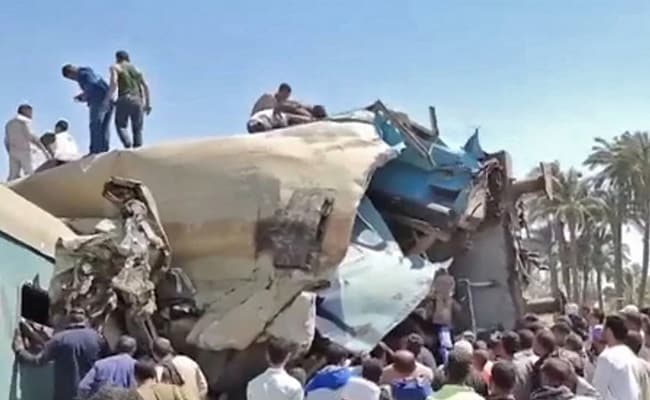 People gather around the wreckage of two trains in Egypt.

A collision between two trains killed at least 32 passengers and left more than 100 injured Friday in southern Egypt, a country plagued by fatal rail accidents widely blamed on crumbling infrastructure and poor maintenance.

President Abdel Fattah al-Sisi pledged tough punishment for those responsible for the crash, which came as his government wrestles with another major transport challenge, a giant container ship blocking the Suez Canal and causing huge traffic jams at either end.

The health ministry said dozens of ambulances rushed to the scene in the Tahta district of Sohag province, some 460 kilometres (285 miles) south of the capital Cairo after the collision.

Thirty-two people were killed and 108 injured, the health ministry said in an updated casualty toll.

Springs and twisted metal jutted out from the wreckage, as dozens of people gathered around the overturned carriages, an AFP correspondent reported.

Harrowing images from inside one of the carriages posted on Facebook showed men and women screaming for help as they tried to free themselves from the wreckage.

"People are dying. Where are the authorities? Help us," one young man shouted repeatedly.

An image showed another man covered in dust trapped by twisted metal in what could have been the aisle of the carriage.

In another frame, a man is heard urging a middle-aged woman who appears stuck between seats to move forward. She struggles and is heard saying: "Please, my, son help me."

Egypt's rail authority said the crash occurred after unidentified passengers had "activated emergency brakes in several carriages" in one of the trains.

A statement said that one train hit the last carriage of the other, causing at least two carriages to overturn between the stations of Maragha and Tahta.

Health Minister Hala Zayed travelled to Sohag to check on the injured, as authorities opened an investigation into the accident.

President Sisi vowed "deterrent punishment" for anyone found responsible for the collision.

"Anyone who caused this painful accident through negligence or corruption, or anything similar, must receive a deterrent punishment without exception or delay," he tweeted.

Egypt has been plagued with deadly train accidents in recent years.

One of the deadliest was in 2002 when 373 people died as a fire ripped through a crowded train south of Cairo, and there have been many fatal crashes since.

At the time, rail managers blamed the crash on signals not functioning in bad weather.

And in February 2019, a train derailed and caught fire at Cairo's main railway station, killing at least 22 people and injuring 41, and prompting the transport minister, Hisham Arafat, to resign.

Wazir had been the head of the Egyptian military's engineering authority since 2015.

The unit is behind many of the army's mega-projects, including a new capital east of Cairo and construction of everything from hospitals to sewage treatment plants.

Since he took office in 2014, Sisi has appointed military officers to high-ranking positions, including governorships.

He has repeatedly praised the military's role in delivering major projects in record time such as the expansion of the Suez Canal in August 2015.

The strategic waterway has made headlines since Tuesday, when the container ship MV Ever Given -- which is longer than four football fields -- got stuck across the entire canal closing off the vital shipping lane.

The blockage has caused huge traffic jams at either end of the 193-kilometre (120-mile) long canal and major delays in the delivery of oil and other products.

Tugboats and dredgers were working Friday to free the vessel as companies were forced to re-route services from the Suez Canal around the southern tip of Africa, a far longer route.

Egypt's Suez Canal Authority said the vessel veered off course and ran aground when winds reaching 40 knots whipped up a sandstorm that hampered visibility.

Dogs Can Detect If People Are Stressed: Research