$300 for a Balloon? Yes, But This Old One Tracks Down Storms 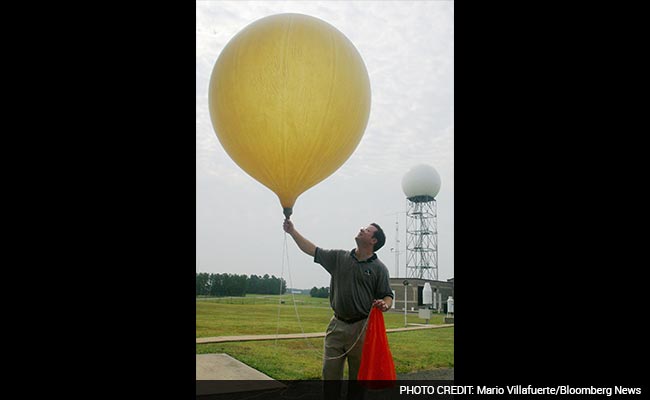 A 2005 photo shows the launch of a weather balloon from the National Weather Service office in Shreveport, Louisiana. Even in an age of satellites, radar, jet aircraft and high-speed computers, humble weather balloon remains a vital tool.

When the latest computer forecast models couldn't figure out where major Hurricane Joaquin was headed earlier this month, the National Weather Service ordered extra launches of one of its oldest tools - the weather balloon.

Twice a day, in what may be the world's largest act of international cooperation, crews at about 850 weather offices around the globe walk outside and set loose balloons at precisely the same time.

In an age of satellites, radar, jet aircraft and high-speed computers, a method of gathering weather data that became routine more than 80 years ago would seem outdated. Not so, said William Blackmore, meteorologist with the National Weather Service's upper-air observation program.

While all the modern advances are crucial tools for forecasting, weather balloons can do something all the rest cannot: measure the atmosphere from the surface to about 115,000 feet (35 kilometers) every second, he said.

"What makes it unique is that it's providing information every 15 to 20 feet," Blackmore said. "At the present time, that can't be beat."

In the United States, 92 weather service offices make the twice- daily launches, sending the balloons, usually hydrogen-filled, into the atmosphere, Blackmore said. With a few extra launches thrown in, the United States alone sends about 70,000 to 75,000 balloons skyward annually. Each balloon sounding, including labor, maintenance and parts, costs about $300.

Around the world, there are 1,300 sites where balloons can be launched, though only about two-thirds of them take part in the daily sampling, according to the World Meteorological Organization's website. That is about 620,500 balloons per year. This may be why so many U.F.O. reports have been dismissed as weather balloons over the years.

The idea of reaching into the sky to see what's going on up there has been around longer than humans have been able to get airborne.

Kites carrying thermometers were first used in Europe in 1749. In 1885, the U.S.'s Henry Allen Hazen rode balloons above the Earth's surface to take observations, according to the National Oceanic and Atmospheric Administration's website.

Outside Boston, at the Blue Hill Observatory, 19th-century researchers sent a kite 2,030 feet above sea level on Aug. 4, 1894, the organization's website said. By 1898, kites were being used across the U.S.

"If you look at a kite, it could make a very good platform," Blackmore said. "The problem with the kite is you need wind and they could only go so high."

By 1909 the kite was out and the balloon was in. In 1938, balloons started carrying radiosondes, packages of instruments that measure the weather and radio the information back to the surface. This allowed meteorologists to gather data from as high as 100,000 feet.

With a few technological improvements, such as global positioning satellite data, the same system is in place today.

After being radioed to ground bases, the information the balloons gather -- air pressure, wind speed, temperature -- is fed into computer models along with data from other sources to help forecasters predict the weather.

Blackmore said the balloons are about 5 feet across when launched and swell to more than 20 feet by the time they reach about 115,000 feet. The lower air pressure at the extreme altitude eventually causes the balloon to burst.

Protected in a plastic or Styrofoam case, the radiosonde parachutes back to the ground where, forecasters hope, someone will come along to find it and mail it back to the weather service. The radiosonde has a message written on it explaining what it is, plus a postage paid mail pouch.

Fewer than 20 percent are refurbished and flown again, Blackmore said.

Even so, that's equipment the weather service can't do without.