270 votes to win: The quirky US White House race 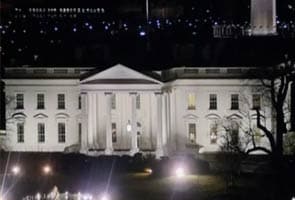 Washington: In a quirk of the US system, American voters do not directly elect their Presidents and Vice Presidents. Technically speaking, they pick "electors" in an Electoral College.

Here is how this unique system, laid out by the country's founding fathers, works:

-- A total of 538 Electoral College votes are distributed among the 50 states and the District of Columbia (the nation's capital, Washington DC).

-- Presidential hopefuls must win 270 Electoral College votes or more to be elected.

-- In the event of a tie, in which each candidate wins 269 electoral votes, the House of Representatives, currently dominated by the Republicans, would be called on to choose the president.

-- Each state, and DC, has a minimum of three Electoral College votes, but those with the largest populations have the most.

-- California has 55 Electoral College votes, Texas 38, and New York and Florida 29, making them the largest states up for grabs.

-- Almost 40 states are seen as shoo-ins for either the Democrats or the Republicans.

-- This means the battleground is across a clutch of swing states, with varying numbers of Electoral College votes on offer.

-- Florida is the largest swing state in terms of Electoral College votes. Then comes Ohio with 18, North Carolina with 15 and Virginia with 13.

-- The candidate who wins the popular vote in each state wins all its Electoral College votes, except in Maine and Nebraska, which use a tiered system.

-- The political parties (or independent candidates) in each state submit to the state's chief election official a list of individuals pledged to their candidate for president and equal in number to the state's electoral vote.

-- Democrats and Republicans select these individuals either in state party conventions or through appointment by state party leaders, while third parties and independent candidates designate theirs.

-- The electors, as they are known, will meet in their state assemblies on December 17, 2012 to formally elect the next president and vice president of the United States.

-- Supporters argue that changing the system to a direct vote for the president would concentrate too much power in the hands of urban populations to the detriment of rural, more sparsely populated states.