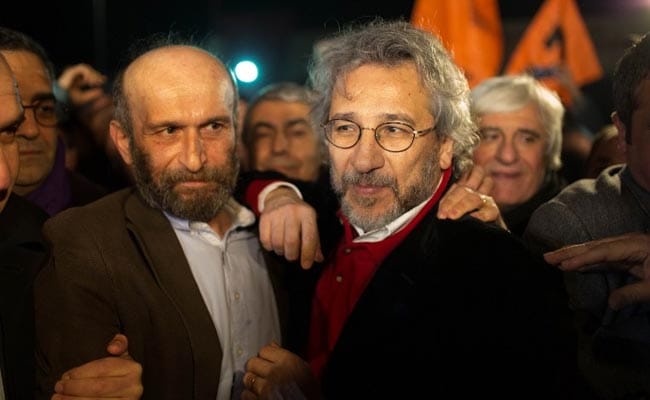 Can Dundar (R), and Erdem Gul (L),talk to the press after being freed from Silivri prison. (AFP Photo)

Istanbul: Two Turkish journalists charged in a hugely controversial case with revealing state secrets and held in jail for the last three months were released earlier today after Turkey's constitutional court ruled their rights had been violated.

The Cumhuriyet newspaper's editor-in-chief Can Dundar and Ankara bureau chief Erdem Gul walked free from the Silivri jail on the outskirts of Istanbul to be greeted by jubilant supporters and family, the Cihan news agency and their newspaper said.

They had been detained since November over a report alleging that President Recep Tayyip Erdogan's government tried to ship arms to Islamists in Syria.

The pair had been due to go on trial on March 25 and had been held in jail for 93 days.

"I think that this is a very historic decision," Cihan quoted Dundar as saying as he left the prison alongside Gul.

"The decision of the constitutional court is not just for us: it applies to all our colleagues, press freedom and freedom of expression." 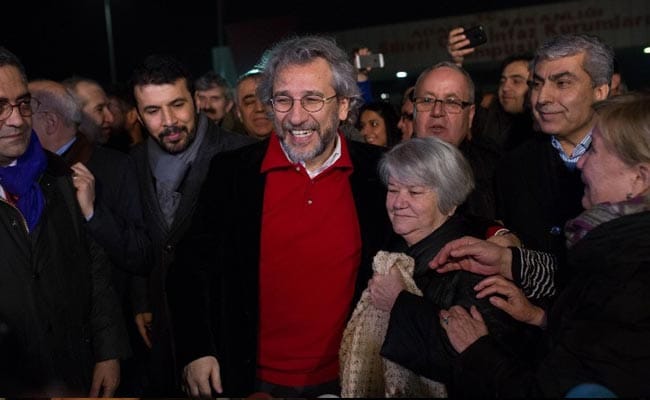 Can Dundar (C) ,hugs his mother after being freed from Silivri prison in Istanbul on February 26,2016. (AFP Photo)

He noted the irony of being released on February 26, Erdogan's birthday. "We are very happy to be celebrating the birthday and the release," he added.

The constitutional court had ruled that their "rights to personal liberty and security had been violated," the court said in a statement on its website.

"Their freedom of expression and freedom of press" was also violated, it added, ruling to send the dossier to the lower court for "the removal of violation."

The decision was overwhelmingly approved with 12 votes for and three against, Turkish media reports said.

The case was then sent back to the lower criminal court which rubber-stamped the top court's decision and thus allowed the release of the journalists.

Dundar and Gul were placed under arrest in late November over a report in May that claimed to show proof that a consignment of weapons seized at the border in January 2014 was bound for Syria.

They have been formally charged with obtaining and revealing state secrets "for espionage purposes" and seeking to "violently" overthrow the Turkish government as well as aiding an "armed terrorist organisation."

Both Erdogan and the head of the National Intelligence Organisation (MIT) Hakan Fidan -- the president's hugely powerful but low-profile ally -- are named as plaintiffs in the 473-page indictment. 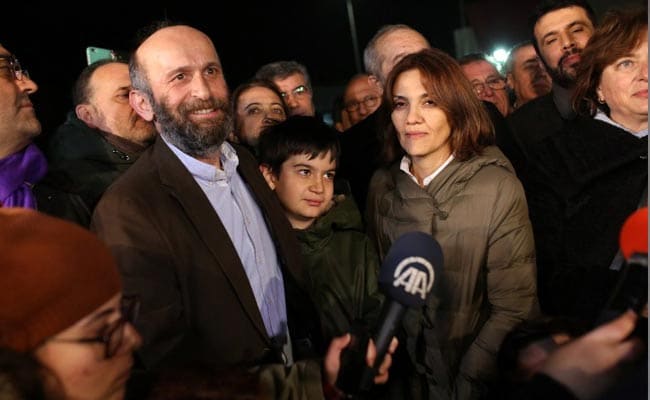 Erdem Gul (L) speaks to media members with his wife and children after being freed from Silivri prison in Istanbul. (AFP Photo)

Press freedom group Reporters Without Borders (RSF) said it was "delighted" by the decision but warned they still faced trial.

"We must all continue to campaign on their behalf. We will not rest until the absurd charges against them have been dropped," RSF secretary-general Christophe Deloire said.

Literary freedom group Pen International said the development was positive in the "current dire situation for freedom of expression in Turkey."

The newspaper report had sparked a furore in Turkey, fuelling speculation about the government's role in the Syrian conflict and its alleged dealings with Islamist rebels in Syria.

"The decision by the Constitutional Court says 'it is not a crime to tell truths'," said the head of Turkey's main opposition Republican People's Party (CHP) Kemal Kilicdaroglu. "I wish freedom to Can Dundar, Erdem Gul and all journalists," he said in a tweet.

The case has amplified concerns about press freedom under the rule of Erdogan, who had personally warned Dundar he would "pay a price" over the front-page story.

Human rights activists have protested at the detention and the charges against the journalists, calling for their release.

The case also added new tensions to relations between Turkey and the European Union (EU) which had warned Ankara it needed to show "full respect" for human rights as part of its membership bid.

US Vice President Joe Biden, on an official visit to Istanbul in January, complained that media were being "intimidated or imprisoned for critical reporting" in Turkey.

"That's not the kind of example that needs to be set," said Biden, who also met with Dunbar's wife and son in talks that greatly irritated the government.

But Turkish Prime Minister Ahmet Davutoglu had himself expressed discomfort with the journalists' incarceration, saying it would be far better if they were freed pending trial.
Comments
Turkish journalists freedCan DundarErdem Gul