19 Minutes With Microsoft's CEO: A New Book, A New Culture And A 'Complete Nonsense Answer'

Now he is an author with a book of his own. When Nadella's book, "Hit Refresh," hits shelves this week, he'll join the few sitting CEOs who've written their own books while still on the job. Even fewer have done so this early in their tenure: Nadella became only the third CEO of Microsoft in February 2014. 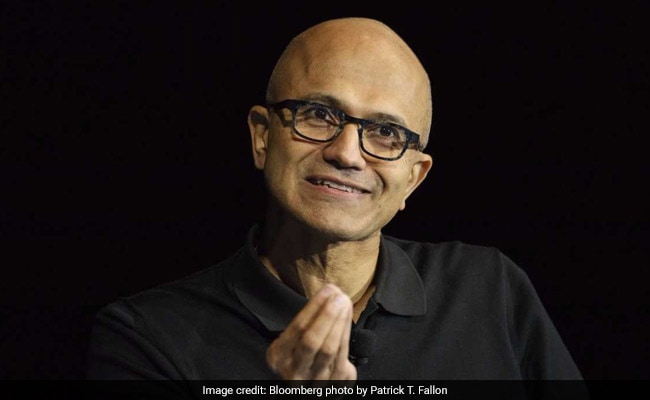 Microsoft CEO Satya Nadella has long been a fan of dropping literary references into business conversation. He quoted Nietzsche in an investor call. He's paraphrased Oscar Wilde in an employee memo. He's tweeted book lists that include Plato and Piaget, and shared insights about teamwork from a nonfiction tale of the rowing team that won the 1936 Olympics.

Now he is an author with a book of his own. When Nadella's book, "Hit Refresh," hits shelves this week, he'll join the few sitting CEOs who've written their own books while still on the job. Even fewer have done so this early in their tenure: Nadella became only the third CEO of Microsoft in February 2014. Part memoir, part leadership guide, part futurist vision of technology, the new book describes how Nadella has been reinventing an aging tech giant into a more open, more collaborative culture focused on putting mobile and cloud computing first.

He clearly has a story to tell. Since Nadella took the helm, Microsoft's stock price has more than doubled. His focus on cloud computing and online productivity software has paid off with strong demand, beating analysts' expectations. He has been on a high-tech shopping spree, adding more than 40 companies over his tenure, including the acquisition of LinkedIn.

He has made Office available on smartphones running other operating systems, and supported the push into innovative areas like the augmented reality headset HoloLens. Perhaps most of all, he's been credited with aiming to overhaul Microsoft's culture, working to shift it from a siloed company with fiefdoms of "know-it-alls" toward a more open, more collaborative culture of what he likes to call "learn-it-alls."

Despite that success, it's only been three years -- and even Nadella admits there is much more work to do. For one, he has formidable competitors in cloud computing -- Amazon and Google -- and it's too early to know exactly how bets like augmented reality will pay off. The Post spoke for just under 20 minutes last week with Nadella about the culture change he's led at Microsoft, how he's tried to think like an outsider and what he learned from that "complete nonsense answer" he gave to a question in 2014 about women and pay negotiations, when he said women should have "faith that the system will actually give you the right raises as you go along." The interview below has been edited for space and clarity.

Q. Do you worry it could be a risk to write a book now, so early in your tenure? That, if the success you've had so far doesn't continue, the book could come back to haunt you?

A. In some sense that was the point of the book. It was not that there is going to be success all the time by following some playbook. If anything, the book is more about how success will only come in the long run if you keep hitting refresh, not to overuse the phrase. Every time you pick something or do something, it's not going to be a hit. We will have ups and downs. The question is how do we deal with those. The book is not about 'hey, this is what I did and that's why we had success in the first three years of my tenure.'

Q. Few CEO successions have been as closely scrutinized as yours. There was a lot of talk about how Microsoft needed an outsider, and even non-tech CEOs like [former Ford CEO] Alan Mulally were discussed. What was it like being at the center of that storm?

A. I had a very important job at a very crucial time inside the company running our cloud infrastructure business. In all honesty I was very consumed by it. A lot of people asked me: When you joined the company, or at any given time, was the goal to get to CEO? I don't think I was sitting around until Steve Ballmer announced he was going to retire [thinking] that there was going to be a succession. I was not looking for my next job.

When the process started I was very honest with the board. When they asked if I wanted to be CEO, I said only if they thought I could be a good CEO. The feedback I got was 'look, if you want to be a CEO, you've got to really want it.' But that's not who I am. That's not how I'm wired. I told Steve [Ballmer] that and he said you're right, you're not. You should be who you are.

Ultimately the board did what every good board should do. They looked far and wide and then finally made the call. But in all honesty I was not at all anxious about the timing and the decision. Inside the company it was pretty calm. I don't know how I could have just started on Feb 14 [2014] and achieved some of the things we as a company were able to achieve if that continuity was not there.

Q. I've read that you've invited CEOs of newly acquired companies to retreats that were once reserved for company veterans. Is that one way you've tried to imbue the place with more outside thinking? What are others?

A. It is true I'm a consummate insider. You can't get any more 'inside' - I've spent 25 years of my life here. But throughout whatever job I've done, I've always tried, in whatever way I can, to build an outsider perspective. We acquire a lot of fantastic talent, and these companies have CEOs. These are people who can teach me a lot and teach a lot of other people at Microsoft a lot, so we want to make sure we learn from them.

The other thing I did was when I was running our online division. [Netflix CEO] Reed Hastings at that time was on our board, and he was kind enough to essentially allow me to become an insider at Netflix. [Nadella shadowed Hastings in a mentorship arrangement on and off for about a year.] One of the issues I had was I'd only worked at Microsoft. I had not seen any other large organization or a fast-growing organization from the inside. He let me do that for a little while. That was the kind of thing I sought out.

Q. Microsoft was known as a siloed place, one with many fiefdoms. What is the most important thing you have done to try and break that up?

A. I wouldn't claim that we've solved this for all time. But there's a framework in the book that has been very helpful. When you're successful, there's this amazing 'lock' you create - a virtuous cycle - between the product or concept you're creating, the capability that is needed to execute on it, and the culture that reinforces them. The difference between a startup and a successful company is you really achieve that lock. If you get the concept right and you get the capability right and you get the culture right and they're all reinforcing each other, you've got your hit.

Now the challenge is what happens ultimately when that concept that you so loved and is such a big hit is no longer driving growth. You've got to come up with a new concept. You've got to enter a new category. In order to do that you need new capabilities and in order to build that you need a culture that enables you to go after the new concept rather than killing it. That's the challenge of any successful company.

Q. So who did you study?

A. You know when I looked back there's a dearth of writing about them. When you look at successful companies and the books written about those companies, it's mostly during periods of success.

Q. You got a lot of flak on the answer you gave at a tech conference several years ago about women and negotiating for pay. What did you learn from that experience?

A. The fundamental realization that was pretty deep for me was how out of touch I was to walk into Grace Hopper and answer the question based on my experience, versus having a deeper empathy for the context of the question. That's why the answer I gave was a complete nonsense answer. The question was not about what worked for me, or how I approached things. It was about what should someone do when you have a system that actually doesn't work for them.

That's what led me to think: Okay, what is the thing that I, as the CEO of a company, need to do to to create that system, which allows everybody to feel that we're able to do their best work? The cultural work on a 'growth mindset' [at Microsoft] was in place before [the Grace Hopper conference]. But the fact that I could stumble and make that mistake, it got me to think, 'wow, this is really something you've got to think about much more deeply.' My responsibility has become much more clear to me.

Q. You said when you started that you wanted people to love Microsoft again. How's that going, do you think?

Promoted
Listen to the latest songs, only on JioSaavn.com
A. The iconic picture that we have used internally to truly capture that is someone who goes into a store and picks up an XBox and hugs it. These are fans of those products. How do we cultivate that? How do we do our best work in these tools and platforms and games so that people love those products -- not just for what the product delivers to them, but what they can do with their own creation? That last part is who Microsoft uniquely is.