A dozen people were killed inside the school, Broward County Sheriff Scott Israel told reporters. Three more died outside, and two others at area hospitals.

The Florida school shooting is likely to revive a debate over gun control.

Parkland, Florida: A heavily armed 19-year-old who had been expelled from a South Florida high school opened fire on campus shortly before classes let out Wednesday, killing 17 people while terrified students barricaded themselves inside classrooms, police said.

The violence unfolded at Marjory Stoneman Douglas High, a school of more than 3,000 students in a tony suburb northwest of Fort Lauderdale where houses sit on broad lots.

The Broward County sheriff identified the suspect as Nikolas Cruz, who had recently attended the school but had been kicked out for "disciplinary reasons." He was captured after a manhunt that transfixed the region and forced a nearby school into a lockdown, said Broward County Sheriff Scott Israel. Students recalled terror and confusion in the aftermath of the shooting.

"It's catastrophic. There really are no words," said Israel, whose own triplets graduated from the well-regarded high school. The victims included several students and adults, authorities said.

In an English class, students were reading Shakespeare's "Macbeth" when the shooting began, and a Code Red was declared.

"We had a fire drill early in the day, so we really didn't know what was going on," said Ryan Kadel, a 17-year-old senior. "We went outside, and we saw a security guard on a golf cart driving really fast and yelling at us to run."

He and two dozen other students fled to the nearest building, piling into a large closet, where they stayed for more than 90 minutes.

"People were texting, trying to find out what was going on. Kids were crying; some people were freaking out," Kadel said. "I'm kind of surprised it happened here, but I'm not really shocked. School shootings happen all the time, and then the news just forgets about them." 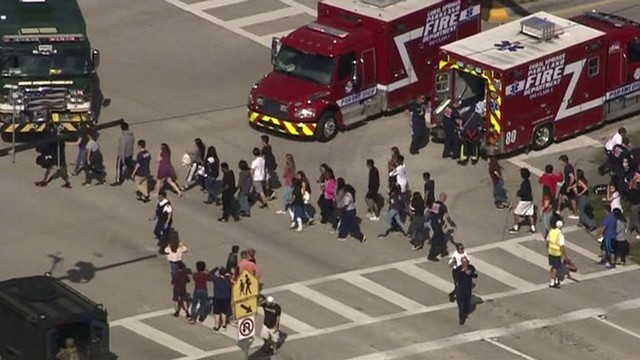 The Florida school shooter came to the school armed with weaponry that evoked a battlefield.

The gunman started firing before even entering the school, leaving a trail of carnage across the sprawling campus, Israel said. A dozen of the dead were found inside the school, and three were found outside. Two others succumbed to their injuries at a hospital. A football coach was among those killed, the sheriff said Wednesday night.

"It is a day you pray every day you don't have to see," said Broward County Public Schools Superintendent Robert Runcie, reflecting on one of the nation's deadliest school shootings.

The shooter came to the school armed with weaponry that evoked a battlefield, not a school located down the street from an equestrian park. He carried "countless magazines" and an AR-15 rifle, Israel said. It was unclear if the shooter had a second weapon, the sheriff said.

Just after 3 p.m. Wednesday, Michael Nembhard - a retiree who lives in Coral Springs, which is just south of Parkland - was sitting in his garage watching the TV news when he heard an officer yell, "Get on the ground!"

He said he looked out and saw police arrest the suspect in the school shooting. The teenager was on the ground, wearing a burgundy hoodie and dark pants.

"The cop had his gun drawn and pointed at him," Nembhard said in a phone interview. "The kid's face was turned away, so I couldn't see anything." 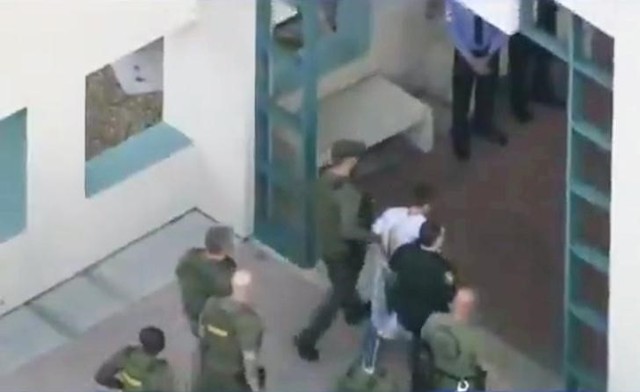 Nikolas Cruz, who had recently attended the school, had been expelled for "disciplinary reasons".

Jim Gard - a math teacher at Stoneman Douglas High, which is named for an icon of the South Florida environmental movement - said he taught the shooting suspect last year.

"I had him almost all year. He just looked like a regular high school kid. Nothing outstanding. He didn't act up in class, wasn't loud or boisterous," Gard said.

But at some point during the school year, Gard said, the school administration sent out a note with a vague suggestion of alarm, asking teachers to keep an eye on Cruz. "I don't recall the exact message, but it was an email notice they sent out."

Authorities who were beginning to analyze his motives had unearthed social media postings that "are very, very disturbing," Israel said.

An Instagram account that appeared to belong to the suspect showed several photos of guns. One appeared to show a gun's holographic laser sight pointed at a neighborhood street. A second showed at least six rifles and handguns laid out on a bed with the caption "arsenal." Other pictures showed a box of large-caliber rounds with the caption "cost me $30." One of the most disturbing appeared to show a dead frog's bloodied corpse.

After the shooting, Ryan Gutierrez, 18, a senior, walked the 2 miles from the school to a 7-Eleven in Coral Springs - the nearest spot where his parents could meet him. Every other road leading to the school was blocked by police cars.

His parents had already been reunited with his sister, Nicole, a freshman at the school.

As Gutierrez approached, his mom ran up, hugged him hard and started crying. Gutierrez held her tight, comforting her. His father came up and hugged them both.

"This has been so horrible, the most horrible day anyone can imagine," Gutierrez's mother, Diana Gutierrez, said, trying to stop her tears. "It's unreal, just unreal. I still don't believe it. You don't think it will ever happen to you and your children."

Nicole said the incident was made all the more confusing because the school had recently held an assembly on emergencies.

"They were telling us what to do in a Code Red, a Code Yellow and all that stuff," Nicole said. "And then we had a fire drill in the morning, and that was normal. And then this afternoon I was in one of the portables, and they said it was a Code Red. Nobody knew what to believe."

Adding to the confusion, security officers had told the students at the assembly that they might have a drill during which police would fire blank shots, to simulate gunfire, Ryan said.

"So when we were hiding in the room, people were saying they heard gunshots, and we didn't know if it was real," Ryan said.

This is at least the third school shooting this year, and one of the deadliest on record. Beginning with Columbine 19 years ago, more than 150,000 students attending at least 170 primary or secondary schools have experienced a shooting on campus, according to a Washington Post analysis of online archives, state and federal enrollment figures, and news stories. That doesn't count dozens of suicides, accidents and after-school assaults that have also exposed children to gunfire.

It is likely to revive a debate over gun control, though efforts to legislate restrictions on firearms following previous school shootings largely proved fruitless.

President Donald Trump said he had been briefed on the shooting and tweeted, "My prayers and condolences to the families of the victims of the terrible Florida shooting. No child, teacher or anyone else should ever feel unsafe in an American school."

Janet Hughes was meeting with her son, Justin, 16, a junior, and his pre-college guidance counselors at the school when the Code Red was announced.

"They grabbed my arm and dragged me one way, and they took him in another direction," Hughes said. "I ended up lying on the floor with the seven other adults in office for 2 1/2 hours. I had to keep asking for the WiFi code, try to find out what was going on. Nobody knew anything."

Justin was corralled into a small room where he spent the next 2 1/2 hours crammed with 70 other students.

"There was a lot of crying, a lot of sobbing going on. People were really scared. We were whispering, trying to keep it quiet," Justin said. "People were trying to get the news on their phones, and they started reading that there were 20 kids dead somewhere at the school."

Denise Loughran was reunited with her 17-year-old son, Liam, within a few hours of the shooting. But they still hadn't heard from his sister, Cara, a freshman.

"Her phone must be in her backpack, and they made them drop their backpacks when they ran out," Loughran said. "This has just been chaos. I couldn't get near the school. My husband took a bike to try to get there, and they ended up sending him to the hotel where they said they were taking the kids.

Promoted
Listen to the latest songs, only on JioSaavn.com
The Washington Post's Devlin Barrett contributed to this report.