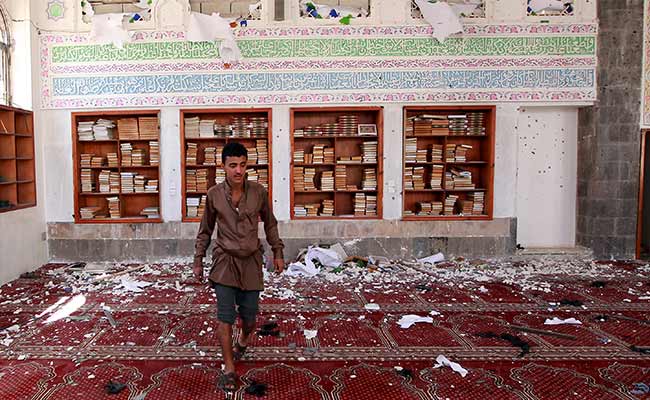 A Yemeni man inspects the damage following a bomb explosion at the Badr mosque in southern Sanaa on March 20, 2015. (AFP Photo)

Suicide bombings claimed by the Islamic State jihadist group killed at least 142 people on Friday at mosques in the Yemeni capital, in an attack targeting Shiite worshippers including Huthi militiamen.

The multiple blasts were among the deadliest attacks yet in Yemen, which is grappling with growing instability and divisions along sectarian lines.

They came a day after clashes between forces loyal to President Abedrabbo Mansour Hadi and those allied with the Huthi Shiite militia in the southern city of Aden, where the leader fled last month.

The suicide bombers targeted two mosques attended by Huthis, who have seized the capital Sanaa.

One struck inside Badr mosque in southern Sanaa while another targeted worshippers as they fled outside, witnesses said. A third suicide bomber targeted Al-Hashush mosque in northern Sanaa.

Nashwan al-Atab, a member of the health ministry's operations committee, told AFP that 142 people were killed and at least 351 were wounded.

The Huthi militia's Al-Massira television said hospitals in the capital had made urgent appeals for blood donations. The imam of the Badr mosque was among the dead, a medical source said.

Footage aired by Al-Massira showed bodies lying in pools of blood outside the mosques, as worshippers rushed the wounded to hospitals in pick-up trucks.

Another suicide bomber blew himself up outside a mosque in the northern Huthi stronghold of Saada, a source close to the militia said.

Only the assailant was killed in that explosion, and tight security at the mosque prevented the bomber from going inside, the source added.

Tip of the iceberg

In an online statement, the previously unknown Sanaa branch of IS claimed the bombings and said they were "just the tip of the iceberg".

"Infidel Huthis should know that the soldiers of the Islamic State will not rest until they eradicate them... and cut off the arm of the Safavid (Iranian) plan in Yemen," the statement said.

The Huthis are accused of receiving support from Iran. IS, a radical Sunni Muslim organisation, considers Shiites to be heretics.

It is the first time that IS has claimed any attack in Yemen where Al-Qaeda remains the most prominent jihadist group. The Huthis overran Sanaa in September and have since tightened their grip on power.

Their attempts to extend their control into other areas have been met by deadly resistance from Sunni tribes and Al-Qaeda.

Yemen, a front line state in the US war on Al-Qaeda, has descended into chaos since the 2012 ouster of longtime strongman Ali Abdullah Saleh, who has been accused of backing the Huthis.

Since fleeing to Aden last month, President Hadi has been struggling to reassert his authority, and violence has erupted there in recent days between forces loyal to him and to the Huthis.

A security official said Friday a top Yemeni officer linked to the Huthis had escaped an assassination bid near Aden overnight.

Four people were killed in an ambush on the Lahj-Taiz road, but General Abdel Hafedh al-Sakkaf, the special forces chief in Aden, escaped unharmed, said the official from Lahj.

"He escaped the assassination bid but a bodyguard was shot dead, while three others died when their vehicle overturned," the official said.

The attack came as Hadi loyalists tightened their control over Aden, where the situation was calm early Friday.

Troops loyal to Hadi and their allied Popular Committees paramilitary manned checkpoints, an AFP correspondent reported. Hadi himself had to evacuate a presidential palace in Aden on Thursday after a fighter jet opened fire, hitting a nearby hill.

Separately, 11 people were killed on Thursday when special forces fighters loyal to the Huthis tried to seize control of Aden's airport from Hadi loyalists, in fighting that forced its closure. The airport reopened Friday with a flight to Sanaa.

Promoted
Listen to the latest songs, only on JioSaavn.com
Following the Huthi takeover of Sanaa, Saudi Arabia and other Gulf countries moved their embassies to Aden and several Western missions closed their doors in the capital for security reasons.

In other unrest, five people were killed as southern separatists attacked police centres in Lahj, a security official said, adding that the dead included three gunmen and two policemen.