Pakistan has an appalling record of fatal traffic accidents due to poor roads, badly maintained vehicles and reckless driving. 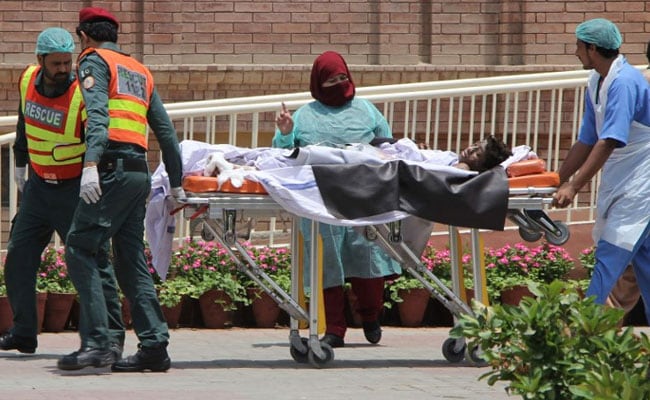 100 people have been injured after oil tanker catches fire in Pakistan.

The horrific early morning tragedy came hours before Pakistan was due to begin Eid al-Fitr celebrations marking the end of the Muslim holy fasting month of Ramadan.

The tanker carrying 40,000 litres of fuel overturned on a main highway while travelling from Karachi to Lahore, near the town of Ahmedpur East in Punjab province.

Details were sketchy but some witnesses suggested the tanker had suffered a burst tyre, said regional police chief Raja Riffat.

"When it turned over the residents of the nearby village of Ramzanpur Joya rushed to the site with buckets and other containers, and a large number of people on motorcycles also came and started collecting the spilling fuel," Riffat told AFP.

"After about 10 minutes the tanker exploded in a huge fireball and enveloped the people collecting petrol. It was not clear how the fire started."

Residents could be seen walking past blackened and twisted bodies piled by the roadside. Earlier, television footage showed shooting flames and a thick plume of smoke as firefighters battled to extinguish the blaze.

The charred wreckage of dozens of motorcycles and cars was scattered on the highway, along with kitchen utensils, pots, water coolers, jerrycans and buckets which victims had brought to collect the petrol.

Dozens of villagers and relatives of victims looked on from nearby farmland, many of them weeping.

"What kind of ill-fated day is today?" one woman asked tearfully. Villagers told AFP that many of the victims had been related to each other.

Hafiz Sohail told AFP his uncle and cousin were among the victims. "Everyone in the family and the village is deeply shocked. Nobody is able to explain what just happened," Sohail told AFP.

"It was all fire everywhere I saw. For quite some time I was unable to understand what was going on."

Mohammad Shabbir, another villager, said the driver was shouting for people to stay away because the petrol could explode at any time, but no one listened. "What is the use of this petrol, what will you do it with now?" he asked, pointing at a bucket in his other hand.

"The death toll has risen to 139 and most of the injured are in critical condition," Punjab provincial health minister Salman Rafiq told AFP, adding that more than 100 were injured.

He said 25 of them have been moved on a C-130 aircraft to Lahore, 10 to Faisalabad and 54 to Multan, with the others  still in Bahawalpur Victoria hospital.

Rafiq said he feared the death toll may rise.

"Many bodies could not be identified as they have been charred very badly," Riffat said, as provincial officials said DNA tests were being used.

Punjab law minister Rana Sanaullah told media the tanker driver had survived the crash and been taken into custody.

China also sent its condolences, its Foreign Minister Wang Yi said in Islamabad where he was holding talks with Pakistan's President Mamnoon Hussain.

Pakistan has an appalling record of fatal traffic accidents due to poor roads, badly maintained vehicles and reckless driving.

At least 62 people including women and children were killed in southern Pakistan in 2015 when their bus collided with an oil tanker.

The country has also long struggled to alleviate a chronic energy crisis, with regular blackouts crippling industry and exacerbating anger against the government.

Many Pakistanis were already unnerved by a series of deadly militant attacks across the country Friday, with officials Sunday increasing the death toll from the assaults in three cities to a total of 69.

Promoted
Listen to the latest songs, only on JioSaavn.com
Social media users Sunday posted messages of grief and solidarity with the victims of the oil tanker crash as well as Friday's attacks, as many prayed for a safe Eid.