A 100-year-old woman from the United Kingdom has received an honorary degree from the University of Sheffield in recognition of the hard work. 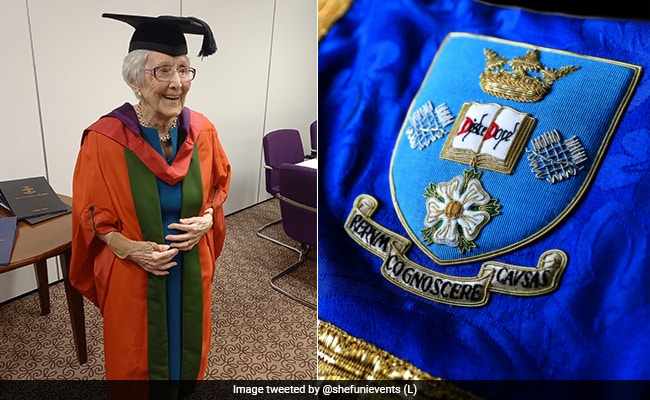 Kathleen Roberts worked in the steelworks during World War II.

When conflicts started during World War II, Kathleen Roberts, who is now 100-years-old, was ordered to work in the steelworks while the men went out to fight, but she and hundreds of her female coworkers were fired without being thanked when the conflict ended, the release further said.

She raised nearly £170,000 to erect a memorial statue in Barker's Pool, Sheffield, and provided medallions for the surviving 'Women of Steel' and their families in order to advocate for women to be recognised for the crucial role they played during the war. She also worked with the Sheffield Star and three other friends for this campaign.

A tweet has also been shared by the University's official Twitter handle on Thursday, along with a short video clip of Ms Roberts.

During World War II, Kathleen Roberts was working 72 hour weeks while being paid less than men doing the same job. Following her campaign to get the city's Women of Steel recognised, Kathleen has been made an Honorary Doctor of Engineering at 100-years-old this afternoon.

— The University of Sheffield (@sheffielduni) September 22, 2022

"During World War II, Kathleen Roberts worked 72-hour weeks while being paid less than men doing the same job. Following her campaign to get the city's Women of Steel recognised, Kathleen has been made an Honorary Doctor of Engineering at 100-years-old this afternoon," the University wrote while sharing the post.

According to the University, in order to keep Sheffield's steelworks sector operating during the war while men were serving overseas, she was enlisted 82 years ago along with other women from the city. She had to work 72-hour weeks at the age of 18, and she was paid less than men who did the same job.The conditions were very poor at that time.

Ms Roberts and her co-workers were told by the men who came back from overseas to keep their mouths shut for what they had been through. Three friends, Kitty Sollitt, Ruby Gascoigne, and Dorothy Slingsby joined her effort to have the Women of Steel ultimately recognised along the road, including Ms Roberts, the last living Woman of Steel.