Ten of the 19 people on Emirates airline Flight 203, which landed with at least 521 passengers were taken to hospitals. 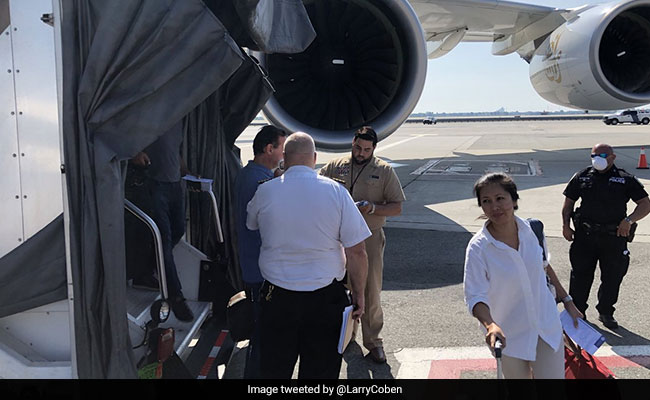 The plane was taken away from the terminal for emergency officials to evaluate the situation.

At least 19 people aboard an Emirates flight from Dubai to New York were confirmed ill when the aircraft landed on Wednesday at John F. Kennedy International Airport, after as many as 100 passengers and crew reported feeling sick, authorities said.

Ten of the 19 people on Emirates airline Flight 203, which landed with at least 521 passengers  were taken to hospitals, while the other nine declined treatment, said Raul Contreras, a spokesman for the New York City mayor's office.

"Everyone else was clear," he said in an interview.

About 100 people complained of feeling ill on the flight from the Middle East, with symptoms including cough and fever, the Centers for Disease Control and Prevention (CDC) said in a statement.

The plane - a double-deck Airbus 380 - was taken to a location away from the terminal so emergency officials could evaluate the situation, officials from the Port Authority of New York and New Jersey said in a statement.

All passengers being asked to fill out the Center for disease control and prevention form pic.twitter.com/6SidlKx090

The White House was monitoring the situation, spokeswoman Sarah Sanders said, and President Donald Trump was being updated as new information became available.

Diala Makki was traveling first-class on Flight 203 en route to New York Fashion Week when she learned from flight crew that a number of people had become sick onboard and passengers were to be detained until officials made checks.

"The Emirates cabin crew were super-helpful, they were not in panic mode, which was amazing," Makki, 36, said in an interview outside of John F. Kennedy Airport. "Then we got the American officials check every one of us until we got out. They dealt with it really well."

Makki, a television host from Dubai, said she got "just a little bit scared" through the entire experience and was aware of reports of 100 people sick.

CDC public health officers worked with other agencies to evaluate passengers, including taking temperatures and making arrangements for transport to hospitals, spokesman Benjamin Haynes said in the statement.

Passengers who were not ill were allowed to continue with their travel plans, he said. It was unclear how many passengers had left the aircraft as of Wednesday afternoon.

The flight lasted nearly 14 hours, according to FlightAware.com.

Emirates airline is based in Dubai, which is part of the United Arab Emirates. The A380 is the world's largest passenger aircraft.