At Least 16 Killed, 24 Injured In Bus Blast In Pakistan's Peshawar

Policemen and rescue officials walk near a bus damaged in a bomb blast in Peshawar, Pakistan on March 16, 2016. (Reuters Photo)

Peshawar, Pakistan: At least 16 people were killed and more than two dozen wounded when a bomb blew up inside a bus in Peshawar, the main city of Pakistan's insurgency-wracked northwest, officials said, with the toll feared to rise.

No group has so far claimed responsibility for the explosion, which took place as the bus carrying mainly government employees was passing through the crowded shopping district of Saddar.

But Pakistan has been battling a homegrown Islamist insurgency for more than a decade, with groups such as the Pakistani Taliban routinely carrying out attacks as part of their struggle to overthrow the government. 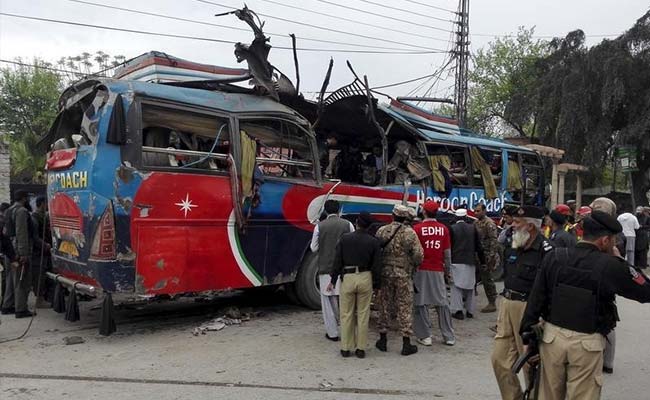 Rescue workers at the site were seen taking the injured from the blue bus and carrying them out on stretchers to waiting ambulances. (Reuters)

"At least 16 people were killed and more than 24 were wounded in a blast on a government employees' bus," senior police official Mohammad Kashif Zulfiqar told AFP.

Another police official and hospital authorities confirmed the incident and casualties.

Bomb disposal officials said a four-kilogramme (nine-pound) improvised explosive device (IED) had been planted near the bus's gas cylinder and appeared to have been detonated remotely.

"The IED was fitted with ball bearings and was planted beneath the sixth row of seats from the back," police official Abbas Majeed added.

Talking to reporters at the site, Abbas Majid Marwat, another senior police source, said the bus was transporting government employees from the northwestern town of Mardan to Peshawar.

Rescue workers at the site were seen carrying the injured from the blue bus on stretchers to waiting ambulances.

Pakistan's Islamist insurgency began after the US-led invasion of neighbouring Afghanistan in 2001, which led to a spillover of militants across the border and a surge in recruitment for Pakistani extremist groups.

The conflict reached new heights in 2007 when various militant factions came together under the umbrella Pakistani Taliban group, which was able to entrench itself in the country's border tribal areas and make territorial gains.

Pakistan's army launched its latest series of offensives in the region in 2014 in a bid to wipe out militant bases bring an end to the war, that has cost Pakistan thousands of lives.

Overall levels of violence have fallen, with 2015 seeing the fewest number of civilian and security forces casualties since the formation of the Pakistani Taliban.

But the militant group is still able to to carry out periodic attacks, particularly in the country's northwest.

A suicide bomber killed 18 people and injured 31 in a court complex in the northwestern town of Shabqadar last week, in an attack which the Taliban described as revenge for the hanging of an Islamist assassin.

The Pakistani Taliban's Jamat-ul-Ahrar faction claimed responsibility for the attack, saying it was to avenge the hanging of Mumtaz Qadri, who gunned down the liberal governor of Punjab in 2011 over a call to reform the country's blasphemy law.

Qadri, feted as a hero by Islamists, was hanged on February 29 in what analysts described as a key moment in Pakistan's long fight against militancy, saying it demonstrated the government's resolve to uphold the rule of law rather than allow extremism to flourish.