In Flood-Hit Tbilisi, Lions, Tigers and Bears Roam the Streets 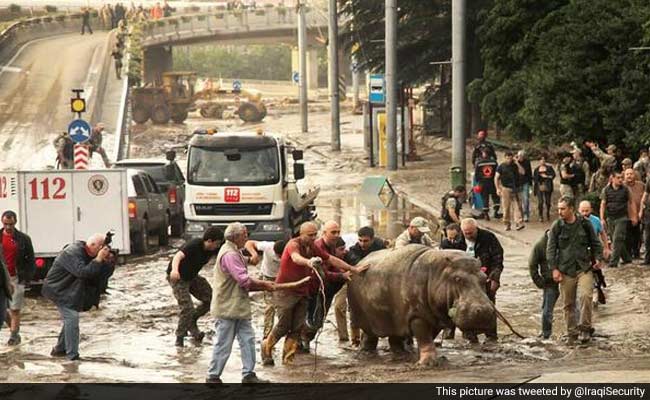 Local residents push a hippopotamus along a flooded street in Tbilisi

Tbilisi: Lions, tigers, bears and other wild animals escaped from a zoo in the Georgian capital Tbilisi today, adding to chaos caused by flooding that killed at least 12 people, officials said.

Police and soldiers were hunting down the animals, recapturing some and shooting others dead, while rescuers airlifted scores of people trapped by the floods.

Prime Minister Irakli Garibashvili called on Tbilisi residents to stay indoors while the animals were still on the loose, describing the damage to the city's infrastructure as "substantial" after the River Vere burst its banks after hours of torrential rain.

"The number of people killed in the flood has grown to 12," a spokesman at the State Security and Crisis Management Council told AFP. "Rescuers are among the dead. The number of missing people is being established. At least 36 people have been hospitalised, including 16 with multiple fractures."

The floods turned the streets and squares into raging torrents, sweeping away cars and flooding houses in the ex-Soviet state.

Tbilisi Zoo spokeswoman Mzia Sharashidze told the InterPressNews agency that three dead bodies had been found on the grounds of the zoo, including two employees.

"Search for animals continues, but a large part of the zoo is simply non-existent. It was turned into a hellish whirlpool," she said.

"Some 20 wolves, eight lions, white tigers, tigers, jackals, jaguars have either been shot dead by special forces or are missing. Only three out of our 17 penguins were saved."

Rustavi 2 television broadcast footage showing a hippo swimming in the flooded Heroes' Square in downtown Tbilisi as rescuers struggled to capture the animal.

Pictures circulating on social media showed a huge alligator wading past parked cars and a bear perched on an air-conditioning unit on the side of a building.

President Giorgi Margvelashvili sent his condolences to the victims' families as he visited the affected area to observe the clean-up operation.

"The human losses that we have suffered are very hard to tolerate. I express my condolences to all the people who lost their relatives," Margvelashvili told local TV.

Several main thoroughfares in the city of 1.2 million were covered with thick layer of mud and hundreds of fallen trees.

The main damage was done when the Vere river - which flows through the park containing the zoo in the centre of the city - burst its banks.

Mayor David Narmania called on Tbilisi residents to help take part in the clean-up operations that are under way throughout the city, with his office saying that dozens of families had been left without shelter and thousands without water and electricity.

The head of the immensely influential Georgian Orthodox Church, Patriarch Ilia II, blamed the floods on the "sin" of Communists who he said built the zoo using money raised from destroying churches and melting down their bells.

"A terrible tragedy happened, people died in the flood. Tbilisi Zoo is ravaged. When the Communists occupied Georgia, and started repressions against Christians and the clergy and the destruction of churches and monasteries, they ordered church bells to be melted, the metal sold and a zoo to be built with that money," he said in his today morning sermon.

"The zoo was built on that money, on that sin and therefore it can't flourish on that place. It must be relocated to a different place. A sin never remains without punishment," he added.

Nino Giorgobiani said rescuers were airlifting scores from flood-affected areas after the heavy rainfall also caused a landslide on the Tskneti-Betania road outside the capital.

In May 2012, five people, including a mother and her two children, were killed in flooding in Tbilisi after heavy rains.

The disaster exposed the ramshackle slums that are home to Tbilisi's poorest and stand in stark contrast to the slick image of the city the country's tourism advert portray.