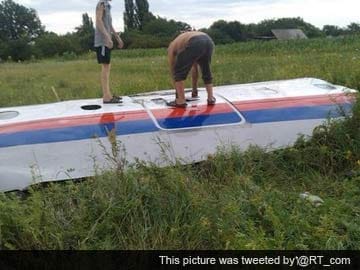 A Malaysia Airlines Boeing 777 with 295 people on board is reported to have been shot down in Ukraine near the Russian border on Thursday evening. Ukrainian officials said local residents had found wreckage. A Reuters reporter said dozens of bodies were scattered around the smouldering wreckage of a passenger jet that had crashed in eastern Ukraine. An emergency services rescue worker said at least 100 bodies had so far been found at the scene, near the village of Grabovo, and that debris from the wreckage was scattered across an area up to about 15 km in diameter.

Row over Journalist's Meeting with Hafiz Saeed: Who Said What